PC gaming is serious business, so much so that competitive gamers will do anything it takes to get the headshot every single time. For this reason and more, gamers need expensive mechanical keyboards and gaming mice with high dpi ratings for better precision.

Asus' Strix series of performance gaming hardware, introduced last year, is aimed at such gamers - the kind who carry their own peripherals to a LAN party. Asus sent us the Strix Tactic Pro mechanical gaming keyboard and the Strix Claw gaming mouse for review, and after playing around with them (quite literally) for a while, we have our opinion.

Asus Strix Tactic Pro
Saying the Strix Tactic Pro is packed to the hilt with features would be an understatement. From 21 programmable macro keys to replaceable WASD keys, Asus has gone whole hog with this keyboard.

The Strix Tactic Pro  is not as heavy as other mechanical keyboards we've used in the past thanks to the use of plastic in its build. However, it is definitely heavier than common membrane keyboards. If viewed in profile one can see that the keys are placed in a gentle curve which makes for great ergonomics. There are two sturdy kickstands on the underside of the keyboard which can be used to prop it up when required. 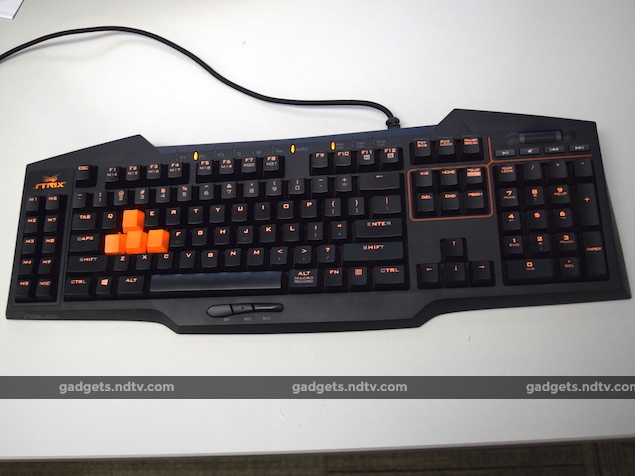 Apart from two columns of five keys for macro functions on the left of the keyboard, all the function keys can also double up as macro keys. There are three more macro keys on the wrist rest at the bottom of the keyboard. These keys use decidedly lower quality plastic and are not mechanical. The multimedia keys are placed above the numpad, as is a wheel for volume control. This wheel has good traction and we got accustomed to using it. Asus also provides four separate, unlabelled orange keys which can be used to replace the WASD keys. The Strix Tactic Pro uses a fat braided cable which doesn't tangle very easily and stays stiff.

Unlike Razer and Mad Catz, which use custom-made switches in their gaming keyboards, Asus has gone with the tried-and-tested standard Cherry MX switches. You can choose between Black, Red, Brown and Blue Cherry MX switches as per your preference. 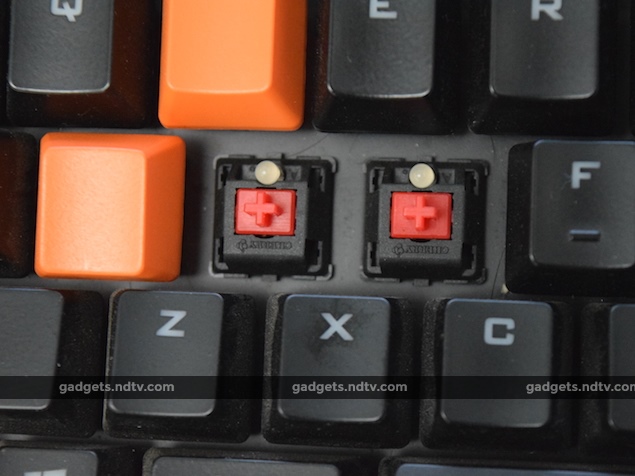 The Black variant was the first Cherry MX switch to ever be introduced way back in 1984 and it is the stiffest one of the lot. Cherry introduced the brown variant in 1994, which has a non-clicky sound and is more suited to typing in quiet environments. The Blue Cherry MX switch makes the loudest sound when clicked, making it easier to figure out when the key press has been registered. Cherry added the Red variant to the MX range in 2008, and it is more suited for gaming. Our review unit of the Strix Tactic Pro had Cherry MX Red switches. Regardless of the type of keys, they have a lifecycle of 50 million keystrokes.

These Cherry MX Red switches are great for rapid action, but remember that you need to bottom out (push the key all the way down) to register a key press on the keyboard. The keys aren't too loud, which means they won't annoy those around you very much. The face of each key is concave and so you always end up hitting them dead centre when typing. 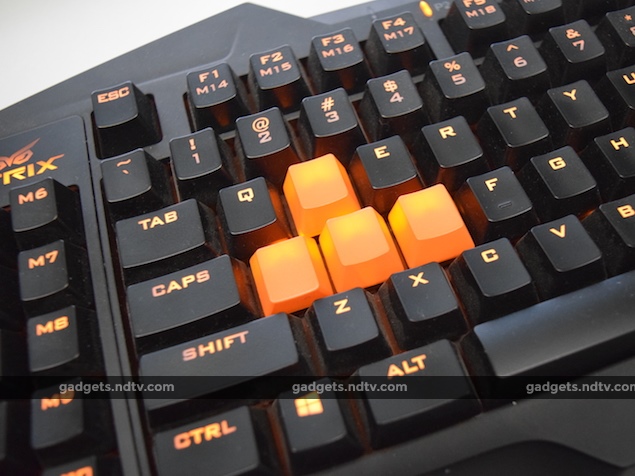 Gamers will also be delighted with the true NKRO feature, which means unlimited N-key rollover, on the Strix Tactic Pro - that too over USB. As a result you will be hard-pressed to detect any ghosting. Asus even lets you switch to a 6KROmode in case you want the Strix Tactic Pro to behave more like a regular keyboard.

The Strix Tactic Pro has orange LEDs under the keys and one can adjust the intensity of the backlighting using the included software. There are four possible levels, but the colour cannot be changed.

Talking about the software, it is very unintuitive. The keyboard itself provides two modes - hardware and software - for programming the functions to macro keys. You can create three profiles in the hardware mode, and cycling through them on the fly is very easy. The keyboard stores these profiles in its 4MB of inbuilt memory so you can use them immediately on new PCs. You can also add many more profiles to your computer's hard disk. Unfortunately, the software stops responding quite often, which can get annoying. 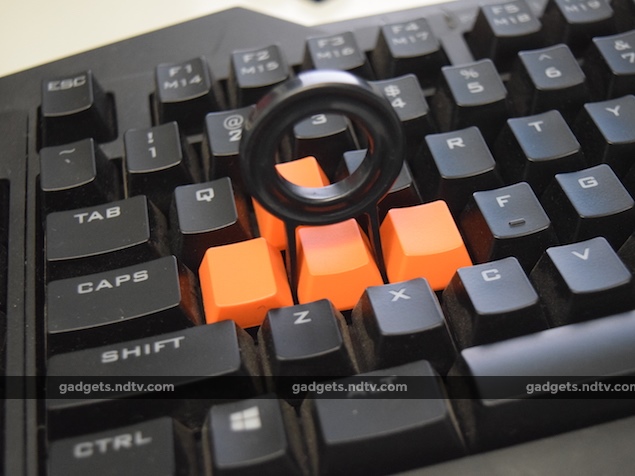 Asus Strix Claw
The Asus Strix Claw is a light and simple gaming mouse that is ergonomically suited for right-handed gamers. The design of the Strix Claw is great if you predominately use a palm grip, but Asus claims it is designed for all grip styles.

Apart from some funky graphics, the Strix Claw has a fairly unassuming design, which is actually a far cry from other gaming products. However, the plastic build of the body doesn't inspire confidence nor does it justify its high price. A scroll wheel sits in between the left and right buttons, and below it there is a DPI Clutch button which allows you to switch DPI levels on the fly. A large Strix logo is placed below the DPI switch, and it lights up in bright orange to match the Strix Tactic Pro. 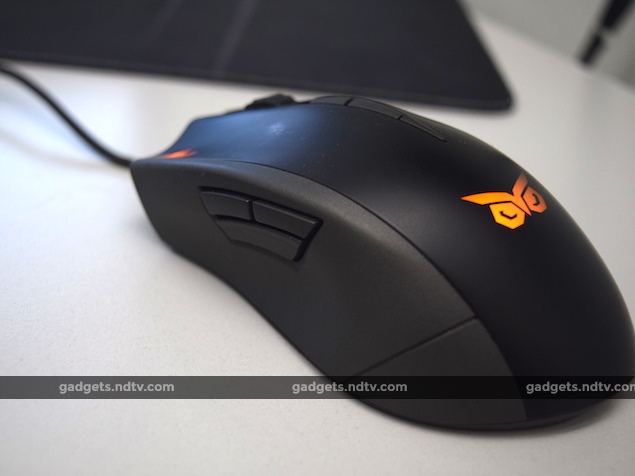 There are three claw marks on the right button, which also have LEDs under them that act as a vague indicator of the DPI level as you cycle through them. There are three programmable buttons on the right, where your thumb naturally rests. Talking about DPI the Strix Claw's 5000dpi Pixart PMW3310 optical sensor promises precision 1:1 tracking in-game. The mouse also uses Japanese-made Omron D2F-01F switches, which have great tactile feedback and a satisfying click, but the buttons themselves feel flimsy.

Using the mouse is easy and it feels very comfortable. The fairly low lift distance of 3mm is great for players who often reposition their hands to line up shots without the crosshair moving wildly. The smooth movement of the optical tracking is an added advantage.

The software lets you program all the keys, including the scroll wheel, to your preference. Once again, we were really let down by the iffy nature of the software. 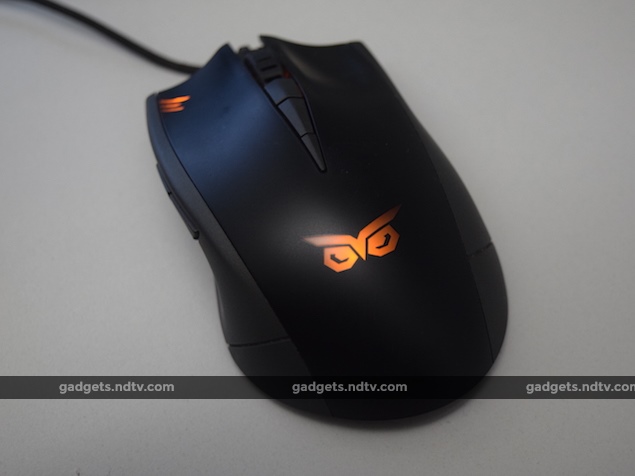 Verdict
Asus has priced the Strix Claw and the Strix Tactic Pro at Rs. 3,600 and Rs. 7,200 respectively, which is frankly quite good value for what both offer. The well-built Tactic Pro is lighter than other mechanical keyboards and has a great set of mechanical keys, thus making it a great LAN party tool. Similarly, the Strix Claw is easy to use and the 5000dpi sensitivity is great for precision gaming. If you can look past the not-so-user-friendly software, which might still be fixed through future updates, both gaming accessories are good investments if you are particularly into FPS and MMO games.