Assassin’s Creed Origins PC system requirements are a lot more CPU-intensive than past games. You’ll need an Core i5 at the very least or an AMD FX processor. Memory is another point of concern with a minimum of 6GB needed to play at 720p (1280x720 pixels).

On the higher end of the spectrum, Ubisoft suggests a Core i7 processor. Video card requirements for Assassin’s Creed Origins minimum and recommended specifications are a lot less taxing. The game is fine with the Nvidia GTX 760 - hardware from 2013.

Booting the game threw up a surprising bunch of varied options and settings to tweak. These include a field of view (FOV) slider that allows you to see more or less of the game world, a setting that the last game - Assassin’s Creed Syndicate - did not have. You can also customise details like Screen Space Reflections - which determine the quality of reflections on wet surfaces. Also good to see is a resolution multiplier. This allows you to play the game in 4K even if you don’t have a 4K screen. You can also decide to force the game to render in a smaller resolution and always upscale it to your screen resolution. All of these allow for a supremely customisable experience that is not possible on consoles just yet.

That said, Assassin’s Creed Origins on PC has one setting that’s borrowed from the Xbox One - Dynamic Resolution rendering. Seen on Xbox One games like Halo 5 and Wolfenstein: The New Order, it’s a technique that allows Assassin’s Creed Origins’ frame rate to be as close to targeted maximum (represented as a slider, allowing to choose between 30, 45, 60, and 90fps). For most part, this switching isn’t perceptible to the player. 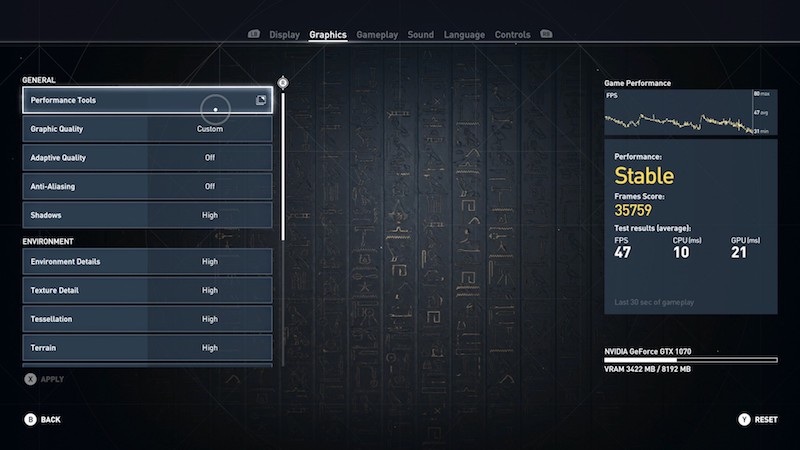 On our test rig consisting of an i5 3470 processor(3.2Ghz), 16GB RAM, Nvidia GTX 1070, and a 500GB SSD on Windows 10 we managed to eke out a stable 66 to 70 frames per second at Assassin’s Creed Origins’ Very High preset with our CPU being the very obvious bottleneck - preventing us from getting higher frame rates. Dropping it a notch to High saw a welcome bump to around 80 to 90fps. The Ultra High option, while still accessible, saw a lesser 54 to 62fps. This made using the Very High preset, along with maxing out the FOV slider, the best way to play. But what of the trade off in terms of image quality? Well, we’re glad you asked because the results are surprising. The difference between Ultra High and High presets - while present - weren’t actually deal-breakers. They were more or less restricted to options like Shadow Quality, Reflections, and Particle Effects.

Sure, the world of ancient Egypt looked more alive at Ultra High, but dropping to Very High or even High showed off a game that bested the PS4 Pro in terms of image quality, particularly in terms of water effects, sharper textures on buildings and other monuments, particularly in locations like Alexandria and Memphis, as well as better looking character models. Thanks to the higher frame rate, combat felt a lot more fluid as did traversal, two added advantages over the PS4 Pro release. It also makes us wonder how the game would perform on the Xbox One X, given its superiority (on paper at least) over the PS4 Pro in terms of GPU grunt.

Assassin’s Creed Origins PC - should you buy it?

Much like past Assassin’s Creed games, Assassin’s Creed Origins taxes processors heavily. In terms of options, there’s a lot to tinker with to alleviate some possible issues. The sheer amount of customisation alone makes it worth considering over other versions, if not for two issues, which may be minor or not. For one, Ubisoft is not releasing the game on disc so unless you have a fast enough Internet connection to download Assassin’s Creed Origins’ 42GB file size, you may be better off with playing it on either console. Secondly, the Rs. 3,499 price may be a pain point for some given that Ubisoft’s prior Assassin’s Creed titles cost Rs. 1,799, but if you have a rig good enough to consider playing it, we doubt that it’s really a problem.