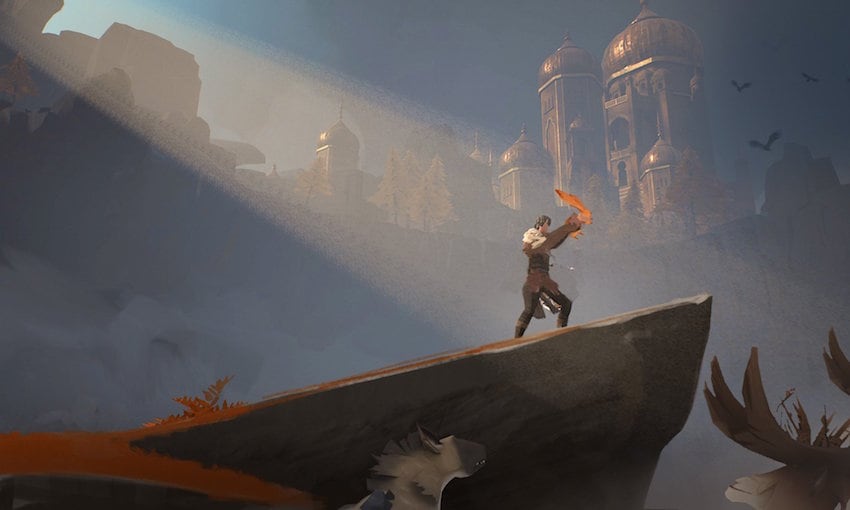 Announced in 2014, Ashen for Xbox One and Windows PC is an action role-playing game developed by New Zealand-based indie studio A44 Games. And like a fair few indie games this year, it's a souls-like, which is sub-genre of titles inspired by Dark Souls. There's a loosely-told story, a sprawling world to explore, and of course tough combat. Be it Scoria, the currency you earn from fallen foes or its control scheme that mimics the From Software classic, Ashen wears its inspiration on its sleeve. If this was all the game did, it wouldn't be as enjoyable as it is. Rather, Ashen's interpretation of the Dark Souls formula might just be the best one yet.

Ashen's premise tasks you with protecting an old God reborn, bringing light back to a previously dark world. Soon enough you and a few non-playable characters (NPCs) find a town that grows as you play through the game, granting you access to new gear through the adventure. The world itself is tastefully created, sporting muted pastel hues with minimal details in terms of character design not too dissimilar to the likes of Volume or Sword and Sworcery. However a fresh coat of paint isn't the only thing that's different about Ashen. There's an emphasis on verticality, with secrets to find scattered across its mountaintops and caverns. You feel like exploring each and every inch of Ashen's world due to how traversal works.

Sure, it's familiar to anyone who has played Dark Souls — you use the analogue sticks on your controller to move your character and tap a button to interact with in-game objects — however it just feels a lot more immediate as compared to the slight but perceptible learning curve in Souls games. It's a small change, but one that makes Ashen all the more inviting. This is further augmented by the aforementioned NPCs that join you on your adventure.

Most souls-likes focus on maintaining an atmosphere of oppression by limiting healing items at your disposal or throwing in tough encounters aplenty. But in Ashen, the presence of competent ally AI makes you feel like taking that extra risk of entering an area that may just be a set up for an ambush instead of running back to your home base to heal up or get more supplies. This in turn impacts the flow of the game, making progression through its many quests feel a lot more natural and less deliberate compared to its peers.

In addition to this, the presence of NPCs in Ashen makes combat just a bit easier. Sure, the dyed-in-wool Dark Souls fan can turn off the option of an AI companion altogether, but for those put off by the sometimes punishing difficulty of souls-likes, it's a welcome tweak to the formula.

And while the presence of ally NPCs is Ashen's greatest strength, it's also the game's weak point. You can't pick what weapons they carry, leaving you at sea in some of its more challenging encounters such as boss fights.

Speaking of which, Ashen's bosses are an interesting lot. One has you dealing with Ukkoto teleporting warrior that walks on all-fours complete with a charge attack that does massive damage. Another has you squaring off against Amiren, a colossus that uses a lantern to heal herself. It's during these fights is perhaps when most players would die often. Though once you figure out how how to exploit their weaknesses — such as hitting Ukkoto as he charges or destroying Amiren's lantern first — they're a breeze to go through.

With five bosses in total, fights are few but satisfying, punctuated with combat that's up to the task thanks to how each hit feels — weighty and impactful. Though some more weapon choices would be nice beyond the mere three varieties of axes, hammers, and spears.

This aside, there's little else amiss with Ashen. Clocking in at around 20 hours, it's a reasonably-sized adventure that doesn't outstay its welcome. Ashen's subtle additions to its obvious inspirations make it greater than the sum of its parts. If you're a fan of Dark Souls or found it and many games inspired by it too daunting, Ashen is well worth checking out.