Anthem is an always-online sci-fi shared world shooter from Mass Effect and Dragon Age developer BioWare. Set in a distant future, you're a Freelancer, a warrior for hire who pilots exosuits known as Javelins. For most part, you'll fly across lush environments with the intention of putting an end to hostile creatures that pepper the landscape. Compared to BioWare's past efforts, Anthem is a drastic change with a focus on slick traversal and punchy gunplay over the deliberate pace of play possible in some of its past works. However, Anthem is also an example that not all change is good.

In our Anthem demo impressions, we noted that it was far from a stable affair, riddled with bugs and glitches that made it a pain to play. And while the final build of Anthem isn't as bad, it's not completely stable either. There's a pause between dropping into a mission area and being able to actually move, which wasn't present in the demo and on occasion, our progress wasn't saved, forcing us to replay certain sections featuring massive bosses and enemies aplenty all over again.

Furthermore, most missions in Anthem follow the same template. You'll fly to a location, take down waves of foes, and indulge in some very light puzzle solving that has you moving pieces of the environment from one location to another. While you're never at a loss for what to do in mission, the narrative bits that glue them together is of varying quality. Some — like tracking down a bandit masquerading as a Freelancer — standout, while others featuring the game's major enemy faction the Dominion are humdrum at best.

Anthem also suffers from some perplexing design choices. Without spoiling much, you'll reach a point in the story which forces you to go into freeplay — Anthem's public play space — to hunt down several key areas. Although finding them is just half the job done. The other is ensuring you can actually access them to take the plot forward. To do so, you'll need to complete a laundry list of boring objectives such as opening a set number of treasure chests, harvest plants found in the game world, or partake in a certain number of side activities within freeplay, known as World Events, to progress.

This method of taking Anthem's story forward simply serves to pad the playtime by forcing you to access freeplay and has no business existing within the game. You'd think BioWare would conjure up a better way to integrate freeplay into its story but evidently this isn't the case. Rather, it's poorly thought out and executed.

To make matters worse, the time spent outside your Javelin has you in a frontier town of Fort Tarsis. You'll explore your surroundings in first-person and it's here where the game's frame rate barely manages to keep up with movement. Everything feels rather sluggish and the sheer act of pressing a button to talk to a character feels slow. Technically, Fort Tarsis is without a doubt, the worst section of the game, at least on Xbox One X and Windows PC. 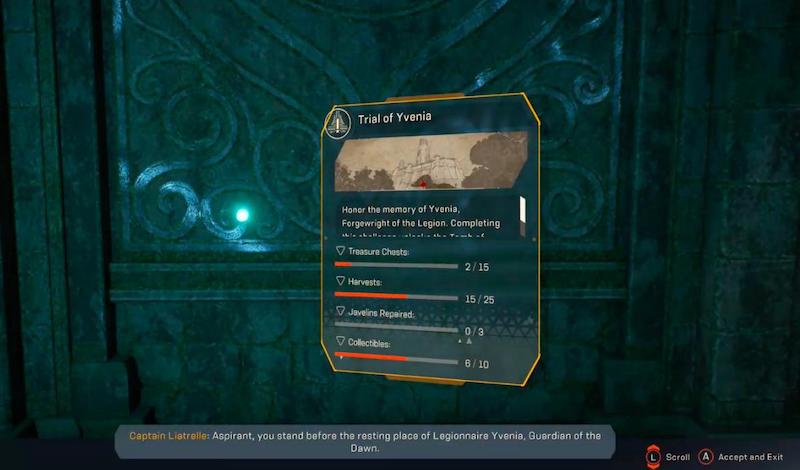 In order to progress through the story, Anthem forces you to undertake mundane tasks as a means of padding out its length.

It doesn't help that its inhabitants — like Owen who provides you support while you're in the field — are exceptionally annoying to talk to, while conversations with others like your reluctant mentor Haluk are cliched and cringe-worthy at best. As we played the game, it became clear that characters like Matthias and Amal who we interacted with in the demo were cherry-picked because they were the most interesting of the lot, and the full game isn't representative of this.

Nonetheless, flying in Anthem is a treat. Tapping a button and pressing down on the left analogue stick makes jetting through the world easy and much like the demo, the best moments of Anthem are simply flying through its colourful locations.

Combat also receives some interesting tweaks with guns like auto cannons and snipers having varying recoil and feedback, making the act of firing fun compared to the dull nature of gunplay in the demo. Guns in Anthem are a decent complement to your Javelin's varied abilities such as homing rockets, siege cannons, and flame throwers, which are a colossal highlight in battle, allowing you to lay waste to its assortment of bugs, wolves, outlaws, and giants known as titans with explosions and spectacle galore.

That said, great combat and traversal alone don't do enough to warrant playing Anthem right now. Poorly thought out progression, grating characters, and inconsistent performance make EA's answer to Destiny and The Division one to skip until after a major update or two hits.

product Is Anthem from Mass Effect and Dragon Age developer BioWare any good? Find out in our Anthem review. 2.5 out of 5 stars