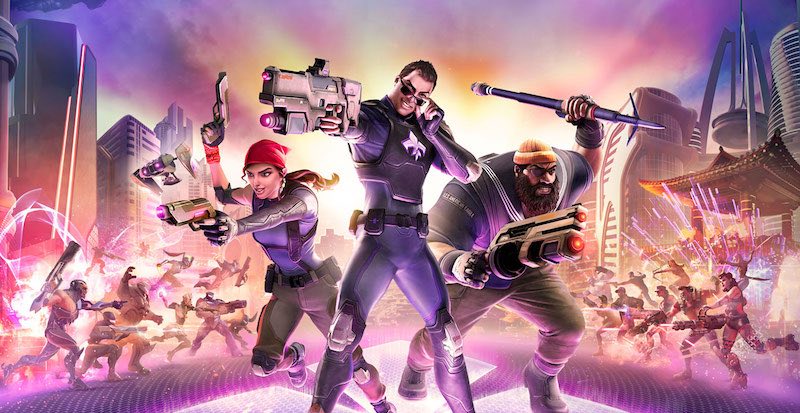 Agents of Mayhem is what happens when Saturday morning cartoons like G.I. Joe meet head-on with adult animated sitcoms like Archer, combined with the varying heroes of Overwatch, and the open-world gameplay of Saints Row.

While that might seem extremely derivative and a bit too much to unpack, the outcome is a surprisingly competent open-world shooter with explosions galore.

The game is a spin-off of the Saints Row series - a franchise known for its over the top presentation. It takes place after the Saints Row IV expansion Gat out of Hell. You play as one of twelve super-powered agents of MAYHEM - short for Multinational AgencY Hunting Evil Masterminds. From the twelve, you can choose three to use in missions, and switch between them. Although the game gives you three to start of with, you unlock the others as you play through the story.

Set in a near future version of Seoul, you’ll be up against LEGION, which stands for League of Evil Gentlemen Intent on Obliterating Nations - a roster of villains akin to what Cobra is to G.I. Joe.

Along the way, you’ll take down gigantic robots, square off against super villains masquerading as pop stars, fight rogue AI, and understand the back story behind each agent and their motives for joining MAYHEM.

From the animated cut-scenes to the double entendre-laden dialogue and even the unique animations for each agent as they warp into vehicles, Agents of Mayhem's a colourful adventure brimming with attitude. All these touches go a long way in crafting a game that keeps you engaged even if each mission might feel cookie cutter.

For most part, you’ll blast through hordes of disposable henchmen, chase after high priority targets, or claim critical locations as you progress. It’s not very different from most open-world games these days, but with a decent chunk of gameplay taking place within generic underground lairs that serve as locations for acquiring heroes or simply progressing through some parts of the story, Agents of Mayhem would feel undeniably blasé if not for its wide roster of characters to play as.

There's Rama, the archer and immunologist, who is a dead ringer for League of Legends’ Ashe; Daisy, who wields a gatling gun whilst on roller skates; or the football hooligan-inspired Red Card. They’re a varied bunch, each with their own unique strengths and weaknesses. Some, such as the harpoon-using Hardtack, can stun foes, while the likes of Joule can deploy a turret on the battlefield to deal with the game’s many threats.

Plus, they all have their own Mayhem (the game’s version of ultimate abilities) and specials that can be used as you play through a mission, such as 80s action hero Hollywood, who can use grenades and explosions to devastating effect.

All of this results in a game that while familiar in its mission structure, can hold its own due to the sheer number of combinations of agents you can use. This allows for a surprising amount of depth and strategy, which is further helped by a suite of side activities, a host of tech to craft, and side-missions for each operative. The crazy presentation of enemies, allies, and delivery of its themes - such as the singularity, VR, and pop culture - making Agents of Mayhem relevant and downright intriguing, even as you’ll want to see what it lampoons next.

That said, the game is far from perfect. Its take on Seoul isn’t as vibrant or vivid as other open-world games, though there’s enough going on to keep you playing. More so when the game drops an assortment of baddies and explosions in your general direction without a single drop in the frame rate on the PS4 Pro.

If you were expecting something as detailed as GTA 5 or Watch Dogs 2, think again. Seoul serves as barebones sandbox for destruction with rarely any real personality of its own to make it stand out. Standard open-world tropes from collectibles aplenty to areas you’ve to capture are present, but there’s nothing about it in particular that leaves an impression on you.

What you'll remember about this game, unfortunately, are its bugs, which essentially block progress. Crucial items like key cards end up missing, and villains go absent from the screen as well. Should you encounter these issues, you have to reload to the nearest checkpoint, which rectified the issue with very little time lost. In our 20 hours spent with Agents of Mayhem we’ve had it happen twice, and your mileage may vary. Hopefully Volition issues a day one patch to fix these concerns.

All in all, Agents of Mayhem is a solid effort. Fantastic heroes, ridiculous satire, and bombastic action make it a game you should check out even if the final product isn’t as polished as it could be.