A Hat in Time Review

Primarily funded off a Kickstarter in 2013, A Hat in Time – an indie 3D platformer that wished to emulate the glory days of Super Mario 64 – finally released in October this year on Windows and macOS. Since then, it has sold over 50,000 copies. And on Wednesday, it is expanding to the PlayStation 4 and Xbox One.

The game stars Hat Kid, a young girl who's on her way back home in her spaceship. But as the ship is passing a planet there's a knock on the glass. A floating self-described Mafia member demands the girl pay the toll, as everyone must in Mafia Town, and the kid's steadfast refusal brings things to a head. The mafioso bursts in by shattering the glass, which causes Hat Kid's valuables – including the all-important 40 Time Pieces, fuel for her ship – to go flying out and be strewn all over the planet below.

A Hat in Time's premise is really an excuse to stitch together its platforming sections, divided into four extremely varied chapters: Mafia Island, Battle of the Birds, Subcon Forest, and Alpine Skyline. Each of these consists of multiple acts, and is set in a world of its own. Mafia Town is the most generic of the lot, but later worlds such as The Owl Express in Battle of the Birds – inspired by Agatha Christie's 1934 novel Murder on the Orient Express – display a lot more creativity. 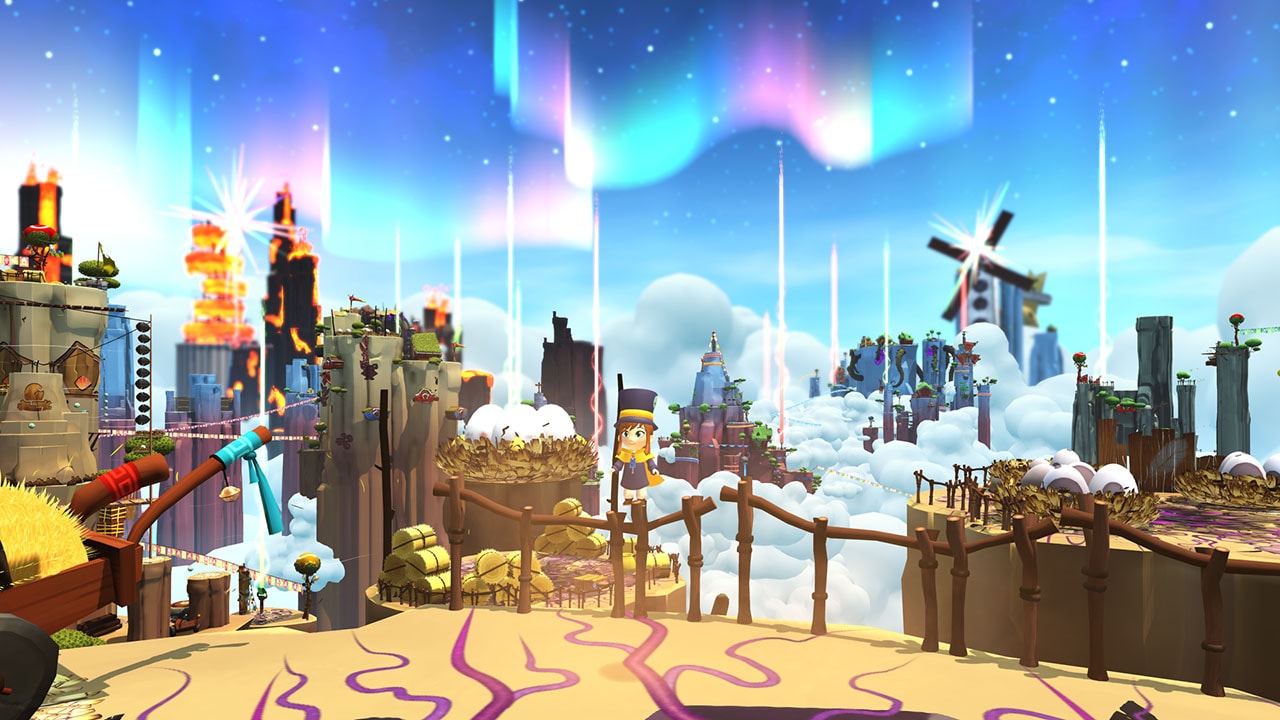 While Hat Kid's ultimate goal is to recover those Time Pieces, you will also have to collect two other items: gems called Pons, and yarn – which contributes to the game's title. The yarn allows you to stitch new hats, each of which comes with its own special ability, be it sprint speed, explosions, and much more. Pons are the in-game currency, and can be used to buy badges that pin on to hats and grant you additional abilities, from a collectibles magnet, to a grappling hook.

In the beginning, you can only attach one badge to a hat, which eventually goes up to three. A Hat in Time has the standard controls (jump, double-jump, and attack) of a platformer in addition to a horizontal lunge that lets you extend your airtime, but it's the hats and badges that really let you customise your playstyle. You can quickly switch hats like weapons with the D-pad, allowing you to tap into the ability you need at any particular moment. Controls are mostly precise, though the double-jump and attack and landing a jump on a curved object aren't intuitive enough.

A Hat in Time doesn't innovate much beyond that, but it's able to generate a mix of engaging gameplay with the options at hand, even if the first world – Mafia Town – is a low point for the game, culminating in a boss fight that provides a surprising spike in difficulty, and not enough latitude for your actions. The platforming bits may well get frustrating for some, and dissipate the charm and personality of the game. 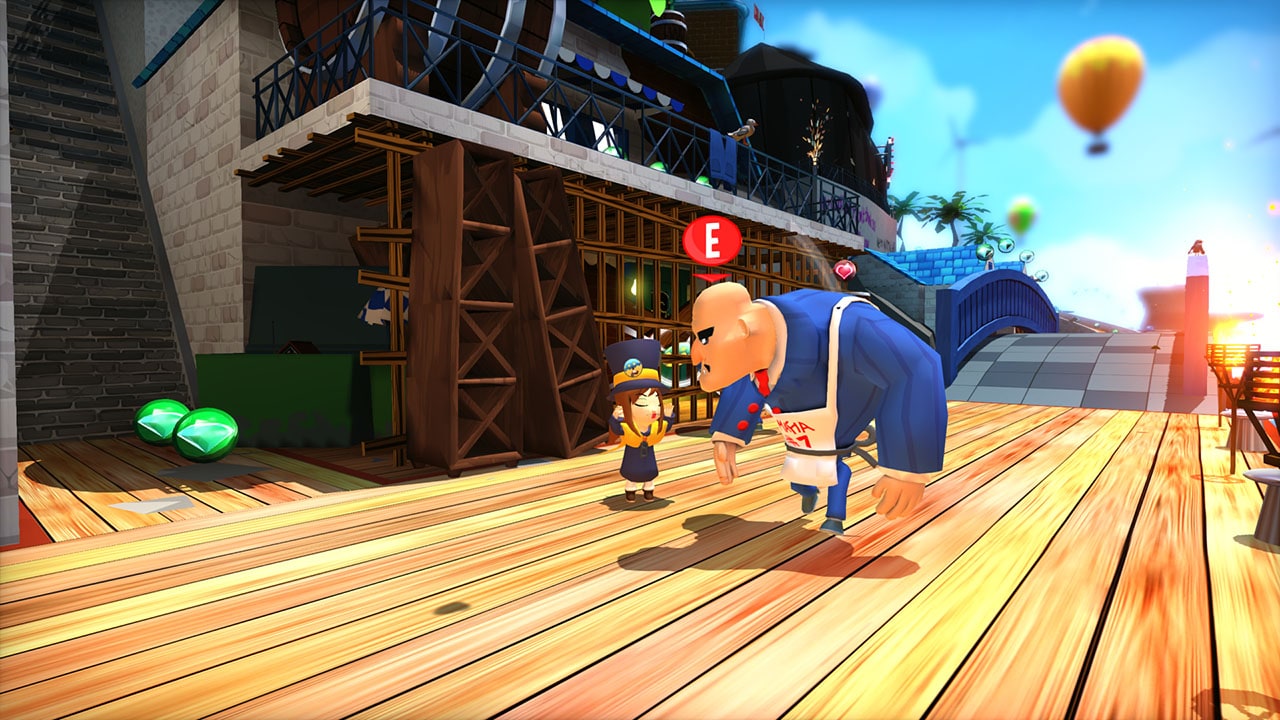 That's a shame because the first chapter serves as a poor indicator of what's to come. In fact, the four distinct worlds of A Hat in Time look and feel so different from each other that they may have well been developed that way. For instance, the voice-acting in Mafia Town is so over-the-top and cheesy that you'll want to mute it at the first pause, but The Owl Express is so appealing that we found ourselves pushing through Mafia Town just to see a crow in a trench coat.

Even as the gameplay mechanics remain the same across A Hat in Time's game time, the levels keep expanding in size and rewards. Plus, there's an inherent joy in crafting new hats for Hat Kid, which keeps you traversing through the worlds to collect all the yarn pieces, be it inside treasure chests, on top of trees, or tucked away in a corner.

It also helps that A Hat in Time is full of eye-popping colour and winning personality, in combination with a playful tone that children will enjoy, and a sprinkling of offbeat humour that the older gamers will appreciate more. The game has been rated 10 ages and up by the ESRB on account of references to alcohol and tobacco, and fantasy violence – a character even talks about cutting up the mafioso and stuffing them in jars – so it's really up to the parents to decide how suitable it is for their kids. 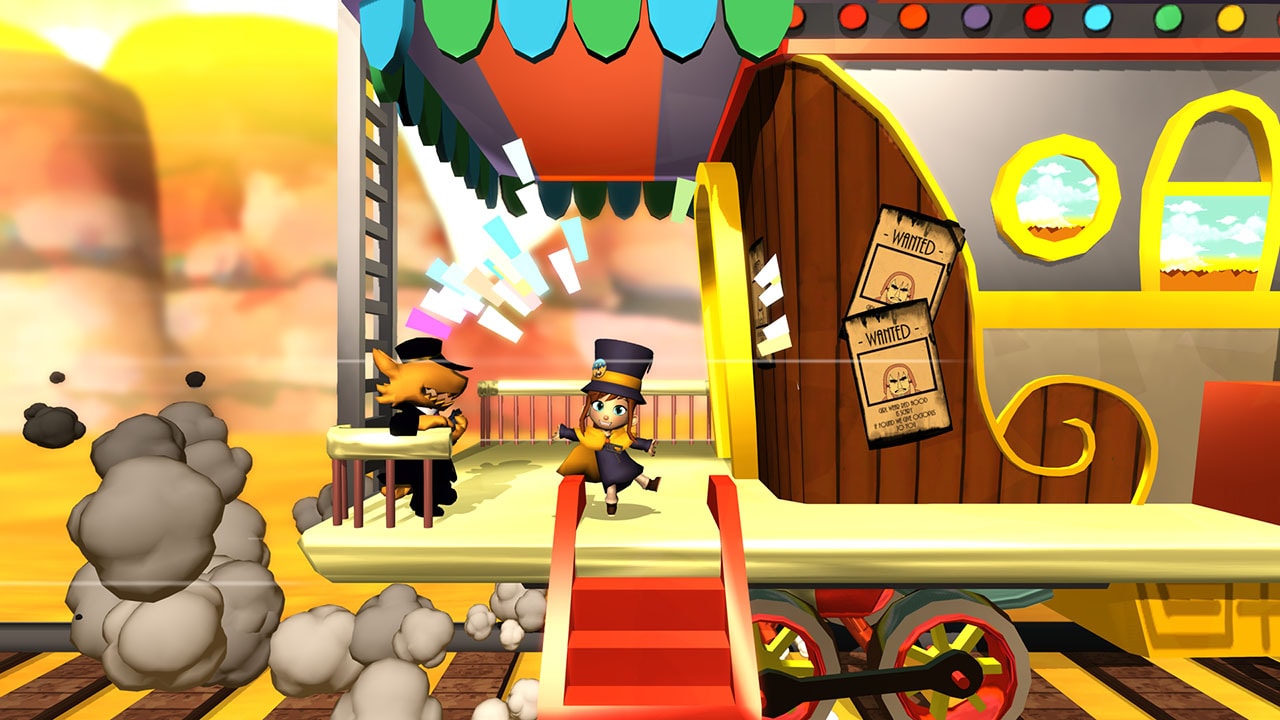 The other problems worth mentioning include the slightly wonky camera, a problem with most 3D platformers, which can sometimes hinder what you're trying to see or achieve; and that the developer Gears for Breakfast has decided to keep the voice-acting of controversial YouTube personality Jonathan "JonTron" Jafari, who made a bunch of racist and xenophobic remarks earlier this year.

He was given a role as part of the Kickstarter in 2013 and only has a handful of lines in A Hat in Time's second chapter, so it's unfortunate that the part couldn't simply be recast. Playtonic Games managed to do exactly that with its own platformer Yooka-Laylee, but that's not the case here. Whether that should affect your purchasing decision is up to you, of course.

A Hat in Time won't wow you out of the gates, but if you can plough through the mud, you'll find an enjoyable 3D platformer with a goofy personality. It may never come close to the heydays of Nintendo 64 and its Super Mario titles, but it's got a lot of charm and enough levels to win you over. And it's finally here for console owners after four years of delays.

Further reading: A Hat in Time, Gears for Breakfast, Humble Bundle
Akhil Arora Email Akhil Akhil Arora covers entertainment for Gadgets 360, interviewing stars such as Christian Bale and Anurag Kashyap, covering series premieres, product and service launches across the globe, and looking at American blockbusters and Indian dramas from a global socio-political and feminist perspective. As a Rotten Tomatoes-certified film critic, Akhil has reviewed over 150 movies and TV shows in over half a decade at Gadgets 360. When he is not completely caught up with new film and TV releases, Akhil ...More
YouTube to Expand Teams Reviewing Extremist Content
Bitcoin Alternatives: How to Buy Ethereum, Litecoin, Monero and Other Cryptocurrencies

product A 2013 Kickstarter-funded indie 3D platformer has finally arrived on the PS4 and Xbox One. 3.5 out of 5 stars