The Nintendo Switch got its first big multiplayer game this week in Splatoon 2. And while the paintball and squid-inspired shooter has launched to rave reviews, there’s one glaring problem with it - the Nintendo Switch Online app.

While not a part of Splatoon 2 per se, the Nintendo Switch Online app shows us how the company thinks multiplayer gaming should work. You install it on your smartphone and use it to set up matches with friends, as well as talk to them, which is crucial for online play. In fact, it’s the only way to voice chat with friends while playing Splatoon 2, or any upcoming Nintendo Switch game that has online multiplayer.

In theory it sounds like an interesting prospect. Offboarding social functions to an app could allow you to set up and schedule matches on the fly, as well as coordinate tactics with friends when you’re away from your Switch - all through a single app that’s tied to the console you’ll be playing on.

It gets worse if you want to play Splatoon 2 on the Switch on the go. You’ll need your console, your smartphone, and a pair of headphones with a mic. You’ll probably also need a power bank or two; one to keep your phone from running out of juice since its screen will be on at all times, and the other to keep the Switch powered up.

All of this results in an awkward, unwieldy mess of a solution that’s far from ideal. Rather, its enough to turn some off from online play altogether. There's the option of using Hori's voice chat headset (available only in Japan), which bridges your phone and the Switch, but you're left with a mess of wires with a splitter and multiple audio cables. 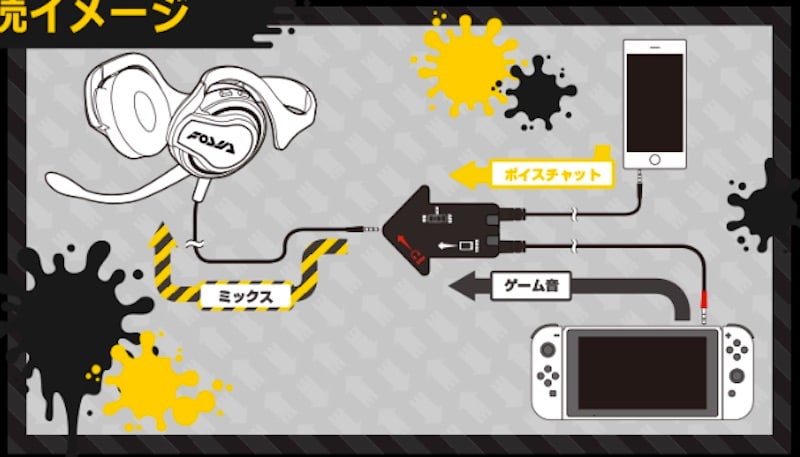 Nintendo has succeeded in making the Nintendo Switch one of the most powerful portable game consoles around. It also has a plethora of varied experiences to boot, making it a great option for the gamer on the go. The way Nintendo decided to implement online connectivity is however at odds with that entirely. It's all the more galling when you consider that Sony and Microsoft have designed their ecosystems for voice chat and ease of multiplayer for a couple of generations now. It's as if the team working on the app wasn’t coordinating its efforts with those designing the Switch, resulting in an unintuitive pain that doesn’t bode well for anyone buying the console, expecting any form of proper online play.

Sadly, this is par for the course from Nintendo. Wii owners had to buy a separate accessory called the Wii Speak, for any form of voice chat. The Wii U did not have universal voice chat either - the only solution was to plug a wired headset into the Wii U GamePad, which meant you if you were using the Wii U Pro controller, you’d need the GamePad by your side as well.

Considering how Nintendo has embraced smartphones in a big way, making some of the biggest iOS and Android games such as Super Mario Run, Fire Emblem Heroes, and its own social app, Miitomo, you’d think there would be a better solution to support one of the fastest selling consoles of all time.

Until Nintendo decides to overhaul the app completely via an update or revise the Nintendo Switch’s hardware to include audio support in the form of a 3.5mm jack on the Pro controller or Joy-cons, as well as create an app for the Switch to allow for built-in grouping or voice chat, you’re pretty much stuck using Discord, Skype, Hangouts, or any other service to talk to your friends while playing Splatoon 2, instead of bother with the Nintendo Switch Online app.

Nintendo needs to figure this out. The Switch is one of the better consoles from the company, and with the likes of Rocket League, PayDay 2, and other multiplayer-focussed games slated for the system, a half-working app isn’t good enough. Until then though, its safe to say this is the company’s worst mobile effort to date.

We discuss Splatoon 2's design and multiplayer failings on Transition, our weekly gaming and pop culture podcast. You can listen to it via Apple Podcasts or RSS or just listen to this episode by hitting the play button below.