LawBreakers Borrows from Quake Champions and Overwatch, but Gets It All Wrong

LawBreakers boasts of an amazing pedigree, with one of the creators of Killzone, and one of the creators of Gears of War behind it. Rather than drawing on the games from either franchise, this team-based first-person shooter borrows from the playbook of Quake Champions, and Overwatch. That sounds great, but unfortunately it’s gone about leveraging their strengths in the worst possible ways.

While its character classes share the same edgy, over the top, 90s shooter personas like Quake Champions, it's far more grating here. Every hero, whether robot or human, is overtly aggressive to the point where you’d think the world of LawBreakers is one where anger management, yoga, or any form of mental therapy doesn’t exist, and every citizen is an escaped inmate from Arkham Asylum. It’s a place where having a personality and attitude evolve beyond the bitchy or vitriolic isn’t possible either.

This extends beyond the characters as well. The game never misses the chance to tell you that you’re bad, and you should feel bad, every time you die. For those of us who don’t use a headset while gaming to avoid the trash talk, it’s thoughtful of developer Boss Key to include this. And by ‘thoughtful’ I mean downright unnecessary.

Voice lines, character skins, aesthetics, and even character animations all reek of this amped up fury that gives the game a monotonous feel. Gamers craving the return of old school multiplayer thrills might be looking for this, but it's unpleasant and not accessible for the rest of the audience. 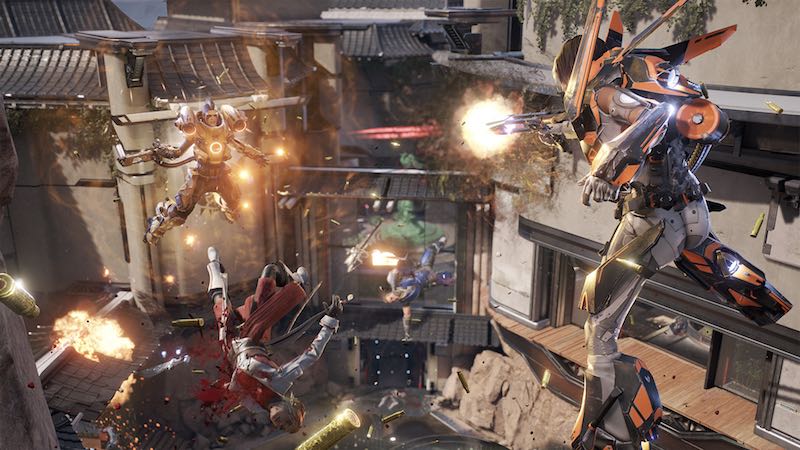 Such is LawBreaker’s adherence to its monotoned pre-pubescent rage that even the game’s menus suffer. Both icons for kills and deaths in its scoreboard are frowns. One has crosshairs, the other doesn’t. It ruins visibility and comprehension of how each round plays out, making it needlessly hard to figure out how you’re performing in a match.

This frankly teenaged mindset extends to the gameplay design as well. The Battle Medic and Juggernaut are the only two classes with support abilities - the former has healing orbs, while the latter can deploy a wall on the battlefield. All the other characters have self-serving abilities. And while it can be satisfying to transform into a hulking mutant, or fire salvos of rockets that’s all it is - moments of glory that don’t do anything to let you turn the tide of a match.

Unlike Overwatch, which lets members of the same team coordinate and stack complimentary skills such as Zarya creating a singularity to draw opponents close, lining them up for Doomfist to activate his ultimate that kills them all. There’s little to no team play in LawBreakers which makes it less fun and strategic.

It's in sharp contrast to the recently released Fortnite - a game marrying survival, crafting, and zombie slaying all while maintaining a veneer of cartoony vibrance. Incidentally, it was made by Epic Games - the company where Boss Key founder and legendary game designer Cliff "Cliffy B" Bleszinski used to work.

All of this is tragic, because movement is blisteringly fast. Titanfall did this well, as did Quake Champions (at least during the beta), and its nice to see Boss Key improve upon both with tighter air control and subtle variations in speed that keep each character unique. Coupled with shrewdly placed low gravity zones within its many expertly designed maps and you have a recipe for exhilarating gameplay.

But smart, fast combat isn’t enough for most. At the time of writing this, it seems that LawBreaker’s active player base is cratering. In fact, it’s already dropping close to below 1,000 concurrent players, and is 60 percent down from the its beta. To put these numbers into perspective, Battleborn, the poster child for online FPS flops had a peak of 12,000 players at launch while LawBreakers had a little less than 3,000.

This could be due to several factors aside from LawBreakers’ aesthetic and tonal choices, such as Overwatch’s Summer Games 2017 garnering more attention, or that core gamers are watching The International 2017 - Valve’s premier Dota 2 event, or just simply poor marketing and visibility. As it happens, the game was planned to be free-to-play. After a dismal showing, it’s just a matter of time before it happens.

Regardless of the reasons for its failings or its price, LawBreakers itself is an unwelcoming, tryhard affair wrapped around a sense of speed that would have been better served in a more appealing vessel. You might be curious to see what Gears of War creator Cliffy B made after the classic Xbox 360 franchise, but don’t let your inquisitiveness get the better of you.

LawBreakers Borrows from Quake Champions and Overwatch, but Gets It All Wrong
Comment