When EA Sports unveiled FIFA 17, the spotlight was on a new single-player mode called The Journey, the first-ever story-driven addition to the franchise. The cinematic narrative mode would follow the life of teenager Alex Hunter as he fights to be the next star of the Premier League. For the sake of authenticity, the developer brought in a wealth of real-world footballing talent – Harry Kane, Marco Reus, James Rodríguez, Eden Hazard, Ángel Di María, and Anthony Martial – to give gamers what it hoped would be “a true-to-life experience”.

As a long-time dedicated FIFA player, I was excited to see what that would mean, be it helping your team clinch victory at the last minute, interacting with some of the world’s top footballers off the pitch, or getting transferred to your dream club. Spoiler: I would be massively disappointed.

Cringe-worthy cut-scenes
As with any story mode, FIFA 17’s The Journey relies on cinematic cut-scenes to move Hunter’s story forward. This starts from a childhood flashback where you get the chance to score the final penalty during a Sunday League cup final, taking part in an exit trial with your buddy (and fellow striker) Gareth Walker, to your ever-supportive mother and famous grandfather – Catherine and Jim Hunter – celebrating your signing with a Premier League club.

Once you get into the English first division, cut-scenes will also take the form of post-match interviews, depending on your contribution to the game or a significant milestone, such as your debut or a crucial win for your club. In all of these conversations and exchanges, Hunter can choose his responses from three options – ‘cool’, ‘hot’, or ‘neutral’ – which in turn affects Hunter’s overall temperament, the manager’s view of Hunter, and the number of followers (yes, social media is a part of The Journey) he has.

The trouble is that not only are the cut-scenes terribly scripted and full of clichés, they also do not have any long-lasting impact – except for manager rating and follower count – beyond that particular exchange. Hunter’s relationship with other characters, and the questioning from the media, will progress the same way no matter what.

A rigid path, no matter what
After taking part in the exit trials, you're given the chance to sign with any one of the Premier League’s 20 clubs. Were it not for the fact that this happened in a game, it would be completely laughable – for a 60s-rated teenager to get a single offer from a first-division club is mind-blowing in itself, but for the entire English top-tier to show up at your doorstep is ludicrous. Part of it has to do with how EA Sports’ FIFA has always been a fan-pleasing franchise, even with its Be a Pro player-career mode that exists alongside The Journey. As opposed to Konami’s Pro Evolution Soccer – which assigns you a starter club in a low-level league – FIFA has always given players the freedom to pick their dream start.

But the freedom to choose exists merely on the surface. Even though I figured I’d have a better chance at starting if I picked Sunderland, that wasn’t to be the case. EA Sports has programmed a singular journey for Alex Hunter, and that means no matter how you perform (or on what level) you’ll eventually be sent out on loan to the Championship. For a club like Manchester City or Liverpool, sending out a 60s-rated future star out on loan makes perfect sense, especially when you have talent bursting through the ranks. But even though I was responsible and involved in two out of every three goals for Sunderland, I was shipped off – because the game’s narrative demanded it.

As if that wasn’t odd enough in itself, FIFA 17 let me pick Newcastle United (along with Aston Villa, and Norwich City as the other two options) as my loan club, which has traditionally been the Black Cats’ chief rival. The reason that happened is of course because EA Sports still has the digital assets for all three of those clubs, seeing how they were part of the Premier League last season. 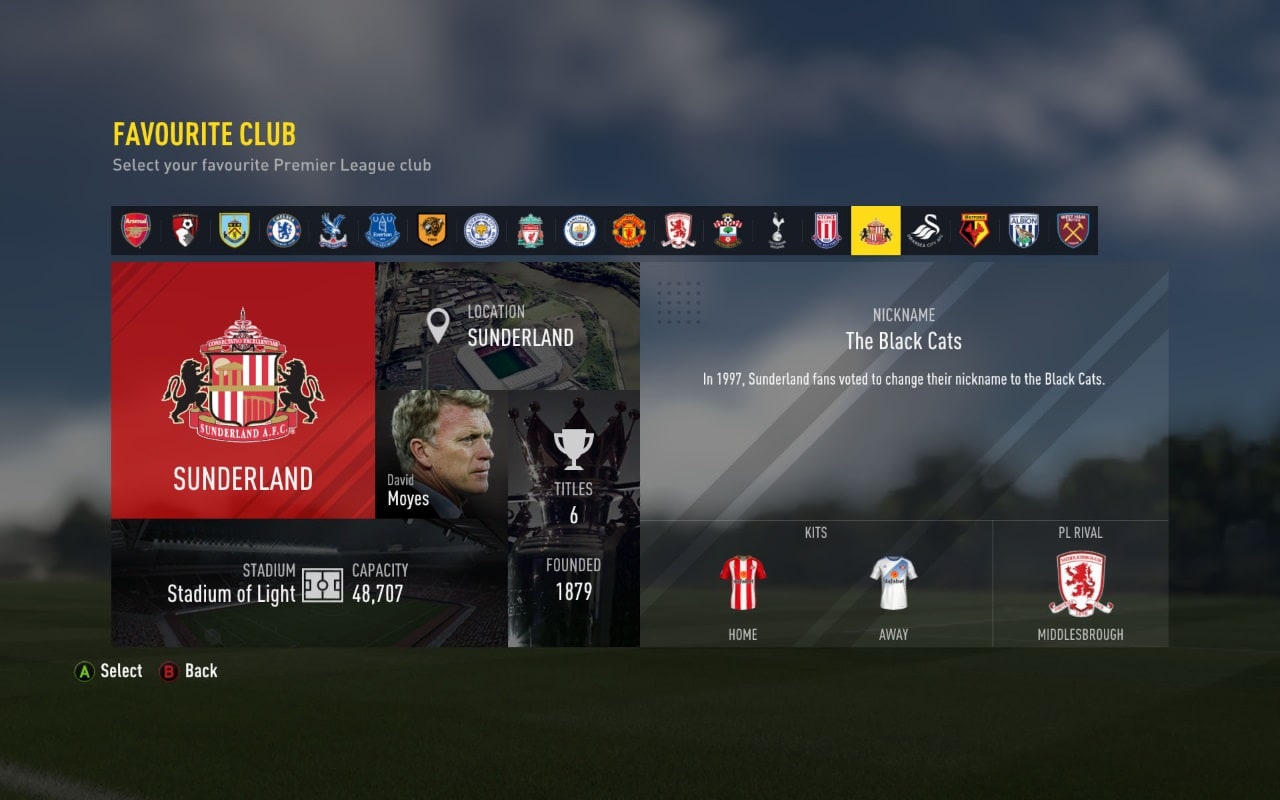 When you pick your first club – in my case, Sunderland – the game tells you that your childhood friend Walker has managed to get a contract with them too. Of course he has. And then, in a bid to bolster their attacking options, Sunderland signed Spurs' forward Harry Kane. This would not only be financially impossible for Sunderland, but would also be (multiple) steps down for a player like Kane, who was challenging for the Premier League title earlier this year.

The reason this happens in The Journey is because EA Sports has assumed that most players would play with one of the big clubs – the Chelseas and the Arsenals – for whom it may not be such a stretch to sign Kane. Allowing so with Sunderland is preposterous, and shows the game’s lack of dynamism.

In The Journey, this manifests in other avenues as well – including the position of your choice, and the games you start as a substitute.

FIFA 17 allows you to pick from four positions at the start of The Journey – striker (ST), attacking midfielder (CAM), and either of the wings (LW/RW). While that’s restricting in itself, what compounds it further is how the game treats your choice. I enjoy playing in midfield and creating chances more than I enjoy scoring, and had therefore gone with the CAM option. Unfortunately, Sunderland’s 4-1-4-1 formation doesn’t have the space for a CAM and so the club played me in the deeper but still creative role of CM. That was completely fine by me.

During my loan spell at Newcastle, I got lucky as their 4-2-3-1 wide strategy meant I could play in my preferred CAM position. But upon my return to Sunderland, I was forced into the role of ST even though I was better at passing than finishing. Being a small club in the Premier League, Sunderland have a defensive playing style which meant I, as Hunter, was isolated and all by myself for most of the match and had to feed off scraps. It made for a largely boring (albeit realistic) experience over and over, and showed how ignorant the new story-driven mode is to player wishes and choices.

Also part of the rigid nature is how early games fold out, when your manager’s opinion of Hunter stands in the “substitutes” category, on a scale of “reserves” to “first team”. If you start games as a substitute, all the minutes before your appearance on the pitch are dissolved into a condensed set of pre-determined cut-scenes. Instead of simulating the action in real-time, which is what Konami has been doing with its Pro Evolution Soccer franchise for years on end, FIFA’s The Journey even starts to skip the cut-scenes after a while. For a mode trying to provide “a true-to-life experience”, it’s the complete opposite.

The ridiculous nature of Hunter and Walker’s “rivalry”
What better way to add some spice to Hunter’s rise in the footballing ranks than to turn his childhood friend Walker against him, eh? That’s what EA Sports has done with FIFA 17’s The Journey, and it begins with the opening game of the season itself. While I, as Hunter, had to be content with a start on the bench, Walker led the line and picked up a goal for himself – all part of the script we talked about earlier.

Things really pick up the day Hunter is sent out on loan, though. Walker starts ignoring your calls, takes potshots on social media, and generally starts to act like a total jerk. Not only is Walker’s descent towards the dark side not convincingly portrayed, what makes matters worse is when you learn the truth of his performances.

In the January transfer window, Walker accepts a “big money move” to your club’s rival in the Premier League, which isn’t mentioned to maintain suspense. Short of a striker, the club recalls Hunter from his loan spell. This, when the club has Harry Kane at their disposal, not to forget the existing forwards – Sunderland’s Jermain Defoe in our case, and the likes of Sergio Agüero (City), Zlatan Ibrahimović (United), or Diego Costa (Chelsea), should you pick a fancier club, as FIFA 17’s The Journey really wants you to. It’s another befuddling writing decision from the EA Sports team, and shoed-in for the express purpose to tell Hunter’s story. Walker’s new club and his performance isn’t revealed until the day until your clubs meet in the league. It was then I found out that Walker was playing for Middlesbrough, the only real “rival” to Sunderland now that Newcastle United are in the Championship. (For what it’s worth, this works out better with other clubs, such as Walker going to Liverpool if you’re in Manchester United.) Two more bits of information made this transfer more bizarre – Walker’s new choice of club were below Sunderland in the league, and he had scored only two goals in over a dozen appearances for his new club playing as a forward. As Hunter meanwhile, I had managed to rack up 10 goals in as many appearances, despite having more qualities of a midfielder. Did someone say rivalry?

Then, there’s the forced FA Cup run. A big part of The Journey’s narrative is the parallel drawn with Alex’s grandfather Jim Hunter, a fictional English legend who racked up 20 goals in the 1966-67 season. He appears in a majority of the cut-scenes, commentators talk about him during games and Hunter carries around an old leather ball as a lucky charm, gifted to him – of course – by his grandad. In between you are also told about Jim’s only regret, that he missed out on the FA Cup.

And hence, in typical Hollywood fashion, EA Sports drags you to the FA Cup final. When the initial rounds rolled around, the manager deemed me unprepared for a cup competition such as the FA Cup, with complete disregard of my form. Sunderland faced Chelsea, Manchester United, and Tottenham in consecutive rounds without me, and I’d give up hope every time I pressed the simulate match button. Magically though, they ended up winning all three times by a margin of 2-0. Surely this couldn’t be coincidence?

When I did get to play in the FA Cup, Sunderland luckily came up against lowly-side Fulham, brushing them aside 5-0 in a lopsided semi-final. Come FA Cup final time at the Wembley, and the surprise: Walker’s team is your opposition, which is a surefire pre-determined way to maintain the built-up “rivalry” between Hunter and him. 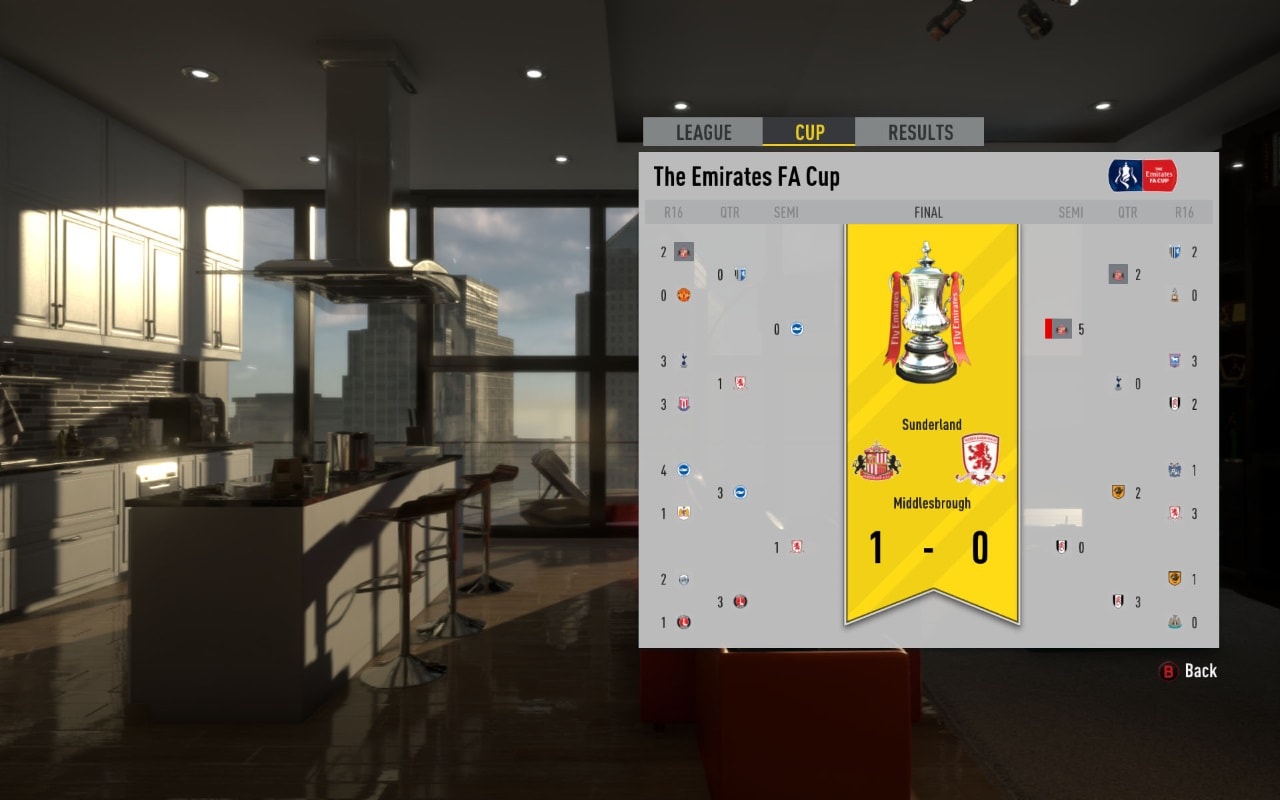 A half-baked exercise
The bottom line is that most aspects of Hunter’s storylines are much easier to digest if you’re playing for one of the big clubs, even if the narrative itself plays out like slapstick. There are other (smaller) concerns as well – FIFA 17 has done away with co-op play in The Journey, even though there exists the ‘Play as Team’ option. If EA Sports feels okay giving control of the entire team even when the mode is built around Hunter, what’s the trouble with letting others join the action?

EA Sports could, and should, have done so much better with The Journey. As opposed to everyone else who functions within the restrictive schedule constraints for an annual franchise such as FIFA, The Journey team worked on the new mode for two years. Prior to release, FIFA creative director Mat Prior said that “different players will have different experiences” but judging by the rigidity of our experience, it doesn’t seem to be that way at all.

Sure, the promise of a possible continuation of Hunter’s journey – which the last scene hints at – is an enticing prospect in itself, but it will need to improve in spades across all aspects, be it factoring in user decisions, developing better interactions, and truly making it feel unique, for it to be worth anyone’s time come FIFA 18.