How I Made the Most of the Age of Empires: Definitive Edition Delay

I was among those eagerly waiting for the release of Age of Empires: Definitive Edition, but five days before its scheduled release date of October 19, Microsoft announced that the game will now release in early 2018. Since the original launch date also coincided with Diwali, I decided to play Age of Empires II: HD on my days off. I fired up the game on Steam and started playing the Genghis Khan campaign and once again, I was reminded of why this is the zenith of the entire Age of Empires franchise.

The Genghis Khan campaign begins with one such voiceover, “A blue wolf took as his spouse a fallow doe. They settled at the head of the Onon River. And there were born the Mongols.” The campaign charts the journey of the Mongols from scattered tribes in Mongolia to conquerors of China and even Europe.

One of the distinguishing factors of this campaign is how every scenario has completely different conditions for victory and how you need to adapt your strategy to suit the map. Even though the Mongols created the fastest expanding empire in the history of the world, they were often outnumbered in battles and yet managed to find ways to win. Age of Empires II’s Genghis Khan campaign starts slowly, with your mission being to unite the tribes initially and to kill a challenger to the king’s throne. Once these basic missions are out of the way, things get really tough, really fast. 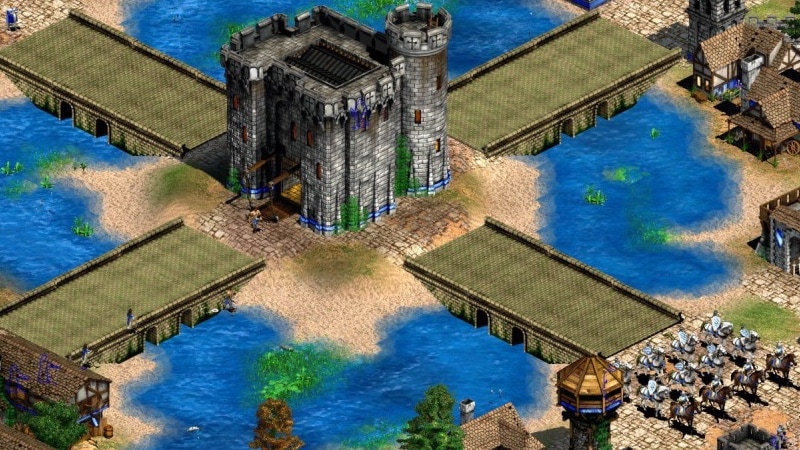 The third mission in the Genghis Khan campaign is called Into China — where you start with few resources, no base, and no siege weapons. You face three enemies who are fully developed, have fully upgraded units, no shortage of resources, and they’re safe behind the Great Wall of China. To top it all, there’s a fourth enemy which starts building a wonder shortly into the campaign and you’ll have to move very fast to destroy it if you want to avoid defeat. A wonder is a unique building that every civilisation in Age of Empires can build and in some missions, building a wonder and defending it for a certain duration lets you (or your enemies) win.

Can Microsoft Successfully Revive the Age of Empires Franchise?

I still remember countless hours spent a decade ago trying to win this scenario even on Standard difficulty because the AI is relentless. This is one of the things that makes the Age of Kings campaigns special — the AI is not easy to play against. The developers realised this and fixed it by the time they released the Conquerors expansion, so if you play Genghis Khan’s campaign, you’ll have to bump up the difficulty when you play the Attila the Hun, El Cid, or Montezuma campaigns.

Into China is the toughest of the Genghis Khan missions but soon after that, things go out of hand. The next mission throws a totally different challenge at you where your armies are divided. General Subotai’s army is in the north, assaulting Russia, while your main army is in the south plotting against the Shah of Persia. It may seem easy but wait until you have to deal with an attack by fully upgraded Paladins and hordes of Elite War Elephants. Both units aren’t easy to kill and the Persians have a lot of resources to assault you.

If that wasn’t good enough, the next mission seems really easy even though you’re up against three European enemies, until the third one attacks you. King Wenceslaus' Army sends over 70 fully upgraded units including lots of siege weapons to assault you and it’s not easy to defend against this onslaught. Here the goal is to capture enemy flags rather than defeat them. This and the last mission, where you need to defeat Hungary, are set after Genghis Khan’s death as his empire continued to expand. While other campaigns such as Joan of Arc, Saladin, and Barbarossa do just as good a job in terms of storytelling, there isn’t any other campaign in Age of Empires II where you’ll find yourself challenged as much as the Genghis Khan missions. After playing this campaign, there was a phase when I went to Wikipedia and started reading about the history of the world, starting from the medieval Mongol Empire to the present day. Yes, I spent days just reading history all thanks to Age of Empires II: HD. Not everything in Age of Empires is historically 100 percent accurate — the developers have taken quite a few artistic liberties — but largely it does well to chart the course of medieval history.

Genghis Khan’s campaign is my favourite because it constantly leaves players with their backs to the wall for long periods until they can gather a decent army to attack. From a purely military standpoint, the way the Mongols adapted through the course of their conquests is admirable. They didn’t even have siege weapons until they attacked China, but they deployed these to deadly effect a few years later in Europe. Just as the Golden Horde kept changing its tactics depending on where it attacked, I found myself looking for new strategies to beat Genghis Khan’s foes in Age of Empires II: HD. This “adapt or die” mindset appeals to me and perhaps that is why I love this campaign. Like me, if you’ve been craving for some more of Age of Empires’ signature campaigns, the Genghis Khan campaign serves as a good reminder of how good the game can be.

Microsoft has also announced that it will release Age of Empires II: Definitive Edition, and my only feature request is voiceovers for the new campaigns added as DLC in 2013. There’s an interesting India angle here too, as one of the campaigns features a famous Indian king — Prithviraj Chauhan. Without nice voiceovers to tell the story, however, the signature Age of Empires experience is missing. Ensemble Studios, the developer of the original Age of Empires trilogy, was shut down in 2009 but it left such a rich legacy of realtime strategy games rooted in history.

Now that Age of Empires IV is being developed by Relic Entertainment (owned by Sega) for Microsoft, there’s a big challenge ahead for the studio. For better or worse, fans will compare the sequel with the first three games and that means Relic has rather big boots to fill. However, Relic is also the studio that has developed amazing realtime strategy games such as Company of Heroes and Warhammer 40,000: Dawn of War, so I’m cautiously optimistic about Age of Empires IV.

Further reading: Age of Empires, Age of Empires Definitive Edition, Age of Empires II, Age of Empires II HD, Microsoft
Pranay Parab Email Pranay Pranay is in charge of podcasts and videos at Gadgets 360. Over the years, he has helped build the tutorials section of this site from the ground up, got the Guide section off the ground, started two podcasts, written several in-depth features, reviewed fitness gadgets, handled social media and most recently, taken charge of videos as well. He loves travelling, particularly to places not frequented by tourists. He keeps running half-marathons across the country and hopes to complete a full ...More
Jio iPhone X, Google Pixel 2 Pre-Order Offers: These Are the Deals You Will Get
HTC U-Series Smartphone Teased to Sport Bezel-Less Display Ahead of Thursday Launch

How I Made the Most of the Age of Empires: Definitive Edition Delay
Comment