Xbox One S India Price Discounted on Flipkart and Amazon to Rs. 19,990, While Stocks Last 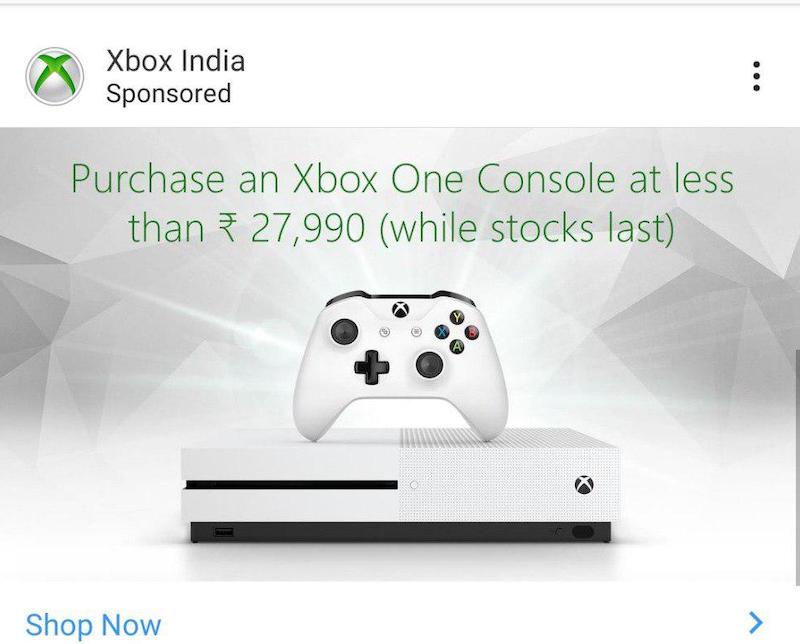 Microsoft has discounted the Xbox One S in India. According to ads on Instagram from the company, the Xbox One S is available for less than Rs. 27,990 with a link redirecting users to a Flipkart listing which has the Xbox One S 1TB console for Rs. 19,990 instead of the Rs. 30,990 MRP along with three months of Xbox Live Gold and Xbox Game Pass. On further inspection, we noticed the same console (minus the Xbox Live Gold and Game Pass subscriptions) with Anthem or Sea of Thieves or Battlefield V for the same price of Rs. 19,990.

While similar deals are present on Amazon India as well, Microsoft seems to be highlighting Flipkart Xbox One S offers only. Before you ask, there aren't any deals on the Xbox One X though.

If you were expecting your local game store to stock up on these Xbox One S offers, think again. Multiple retailers speaking to Gadgets 360 have opted not to bother.

Reason being, Microsoft has refused to supply Game Pass subscriptions outside of Xbox One S and X bundles, which is turning out to be a massive problem.

"Customers come in and buy the Xbox One S because the price is lower than PS4. But most of the buyers are parents with kids. They like the appeal of Game Pass. However they don't want to use their credit card online and would prefer a prepaid subscription," a Delhi-based game store owner tells us on condition of anonymity. "Because of this, they come back later and we can't help them. In fact they simply want to trade the console in for a PS4 because PS Plus has two free games a month and they don't need to use their credit or debit card online."

The Xbox One S price of Rs. 19,990 is decent, though considering it retails for about Rs. 5,000 less in the grey market, and the Xbox Live and Game Pass codes bundled are region-free, would be buyers would have to decide if the additional money for warranty on an official unit is worth it. Even then, the console hasn't performed as well as some would assume.

While Microsoft does not comment on Xbox One India sales, it's low enough for the likes of Fortnite creator Epic Games to not bother making the battle royale sensation available for download on the India Xbox store, among other games like Sonic Mania and Below to name a few. Nonetheless, Gadgets 360 has reached out to Microsoft for comment and will update this story if we hear from the company.