Xbox One November Update Unveiled With Custom Backgrounds and More 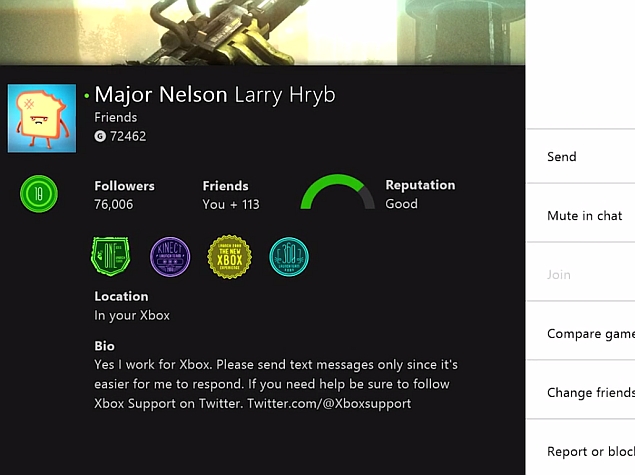 The features included in the November update for Xbox One aim to bring more customization in to the user's profiles along with some additions under the Live TV section, Xbox One SmartGlass experience, Xbox Games Store, and more.

One of the major enhancements touted by the firm is the ability to change the background image for each account on the Xbox One console. Players can choose a custom colour or unlock and use achievement art as the background image. Players can also show their bio and location as a part of their profile. They can also choose a set of items that will be showcased when other players visit their profile, adding up to six game clips or achievements via the Xbox One or the SmartGlass app.

Players, as a part of the November update for Xbox One, would now also be able to share game clips on Twitter by logging in and syncing their Xbox One account. Using the Share button on any game clip will now show Twitter as an option as well.

Users can also view tweets in real time in the MiniGuide section and can join the conversation by typing #SUBJECT. Also, players can activate MiniGuide by a voice command - "Xbox Select - MiniGuide" and view their TV channels under the Recents and Favourites section.

As for SmartGlass improvements, the firm has added a new section for Apps, as well as a 'Coming Soon' filter for games and add-ons. User will now also be able to see their friends' Game Activity via SmartGlass.

Microsoft has also improved the Xbox Games Store pages to help players quickly find their desired content. The company is touting the more prominent navigation bars, and has also added the ability to browse game add-ons, and perform store-specific searches. Store categories have also been standardised for more convenient search.

Xbox Live Gold members can now search for Free Games with Gold, as well as discounted games. Users will also be able to initiate the download via their mobile device.

The Redmond giant has also detailed improvements to the Internet Explorer web browser (bringing Snap mode, featured sites). The Preview Dashboard App has also been revamped with player and statistics, as well as a leaderboard. The complete list of changes is available on the Xbox Wire website.