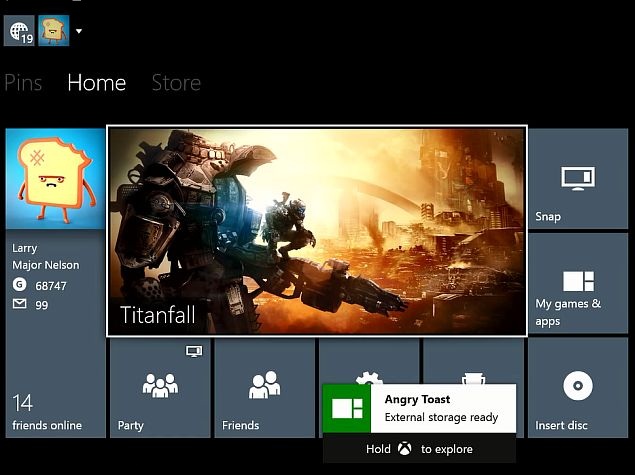 Microsoft, after announcing one of its major updates for the Xbox One console last month, has now starting rolling out the same starting Tuesday.

The main highlight of the Xbox One system update is the external storage support feature that lets gamers carry around their games along with extra DLCs anywhere via an external hard drive. However, the gamer would have to sign in after plugging in the device to continue if the content is purchased digitally. The update lets the Xbox One support up to two external 256GB (or larger) hard drive with USB 3.0 at once.

Additionally, as a result of user's feedback, the upcoming Xbox One system update would also enable users to simply search their friends with real names and not only by their aliases or gamertags on Xbox Live. Users would have the option to make their real names visible between all of their friends, a subset of friends or with no one.

It has previously been mentioned that the upcoming Xbox One system update would offer users new SmartGlass features such as OneGuide and Universal Remote Control, and it can automatically sign-in just by selecting an account.

The Xbox One users in Canada and Europe with the update will also get access to OneGuide and more SmartGlass and voice features. The TV Guide app for Xbox One would now be available in more number of countries - Canada, the UK, France, Spain, Italy, and Germany. The store twist has been also redesigned to let users find their content easily.

With the same Xbox One system update, pin reordering can also be done by users. This would easily let them manage their pins in different categories and preferences. Other improvements in SmartGlass include hero stats and activity to keep up with what other friends are up to. Users can also compare their achievements via SmartGlass.

The Xbox Live Gold members on Xbox One will be able to download Max: The Curse of Brotherhood and Halo: Spartan Assault for free sometime in June under Games with Gold, while Deals with Gold gives Xbox One users 50 percent discount on Crimson Dragon.

It has been also noted that if one's Xbox Live membership lapses on Xbox One, one would have to sign-in again to get the access to free games.