Share on Facebook Tweet Snapchat Share Reddit Email Comment
As the countdown ticks to the unveiling of the next-gen Xbox console, rumours, leaks and reports continue to storm in. Popular gaming site Kotaku is now reporting that every single unit of the new Xbox console codenamed Durango, will ship with an updated and improved version of Kinect. The motion sensing hardware will not be an optional accessory, as it currently is for Xbox 360, according to one of its sources going by the name SuperDaE.

Moreover, the source claims to have reportedly obtained two Xbox 720 development kits along with system overview documents, which detail the specifications of Microsoft's yet-to-be-announced next-generation platform. SuperDaE's information is a result of "what appears to be more than 20 white papers".

Currently rumoured to be known as the "Kinect V2", it could support four-player full-body tracking and allow gamers to sit down while playing. This technology is believed to adapt to gamers' living rooms, meaning they will not need to move furniture for an optimal experience.

In addition, the Xbox 720 will reportedly be able to simultaneously run more than one game or application. If this stands true, then the Xbox will be the first console to offer this functionality, as seen in many smartphones and tablets. The documents reportedly state Xbox 720 games can be put into "suspend" and "constrained" modes, which allow players to pause a game, switch to another title, then return to the first without losing any save information.

Coming to controllers , according to the source's information, Microsoft is reportedly readying a "natural evolution" of the Xbox 360 input. Also, the Xbox 360 controllers will reportedly not work with the next gen console, due to the company's "new wireless  technology."

As far as specs of the console are concerned, SuperDaE's information seems to coincide with earlier reports.

There's 8GB of DDR3 memory, along with a small amount of flash memory for system tasks. The Durango's optical disc drive is 50GB in size, while, as mentioned, there's a 500GB hard drive, with read speeds of up to 50 MB/sec. If you've got a 3D TV set, the Durango is capable--if developers want to support it--of delivering stereo 3D content in 1080p. Those reliant on wi-fi, and who were forced to pay for Microsoft's costly external adapter with the original Xbox 360, will be happy to know that the Durango ships with built-in wi-fi (though there's still an ethernet port for wired connections). In terms of audio, the retail Durango will output via either HDMI or S/PDIF (optical) connections, and can support up to 7.1 channels. 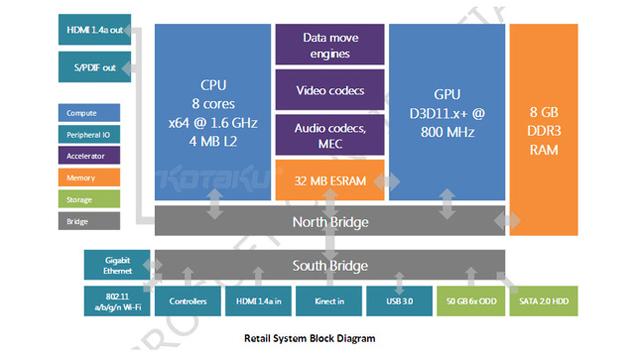 Recent reports from Edge indicated that the new Xbox console will require an always-on Internet connection for games to function and that a new version of Xbox Live will be an "integral" component of Microsoft's new platform.

Furthermore, certain sources with "first-hand experience of Microsoft's next generation console" also revealed that the games will be available via download or in the physical form of Blu-Ray discs with 50GB capacities. They also stated that "games purchased on disc will ship with activation codes, and will have no value beyond the initial user." It's a move that basically aims to eliminate the market for pre-owned games.

But as per SuperDaE's information, there was no mention of whether or not the Xbox 720 would require a constant Internet connection.

If past rumours are anything to go by, then Microsoft might unveil its next Xbox console at a press conference in March, close to the Gamers Developers Conference scheduled to take place in San Francisco between March 25-29.