Xbox 360 with Kinect shows off new tricks at E3 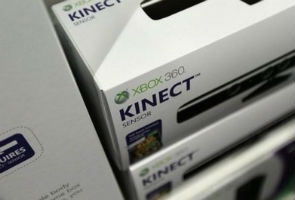 Highlights
Microsoft added YouTube, voice commands, television shows and more to its Xbox 360 with Kinect as the hot-selling videogame console matures into an entertainment center for all.

Studios joined Microsoft on the eve of a premier Electronics Entertainment Expo in Los Angeles to unveil blockbusters such as "Mass Effect 3" that let players use body motion or voice to execute tactics once the exclusive duty of toggles or buttons in controllers.

"Kinect is a natural way to converse with characters," said BioWare co-founder Ray Muzyka, whose studio is behind hit videogame franchise "Mass Effect."

"In a game that already reacts to every decision you make, you will feel even more connected."

Microsoft was intent on broadening the array of Kinect titles to appeal to the traditional "hard core gamers" devoted to shooter games as well as the "casual" audience happy with virtual darts or bowling.

Microsoft ramped up voice capabilities in Kinect to allow Xbox users not only to give commands to in-game characters but to speak Bing searches for games, movies, television shows, music and other entertainment content.

"This is an incredible time of growth and innovation for our business leveraging technologies that see us, hear us and connect us all together," said Microsoft president of the Interactive Entertainment Business Don Mattrick.

"This year by bringing together the power of Kinect for Xbox 360 and the intelligence of Bing, we are transforming how people enjoy entertainment."

Microsoft has sold more than 10 million of the gesture-sensing Kinect accessories for the Xbox 360 consoles worldwide since they hit the market in November of last year.

More than 50 million Xbox 360 consoles have been sold worldwide.

Microsoft has teamed with television operators in Britain, France and Australia in the past two years to bring television shows to local audiences through an Xbox Live online entertainment service.

Executives from the Seattle, Washington-based company said Monday they are making alliances to do the same in the United States and other countries.

"We feel that we have all the great momentum," said Dennis Durkin, chief operating officer of Microsoft's interactive entertainment business. "With our hardware, Kinect sensor, and Live services we feel we can go from being Number One in North America to being Number One worldwide."