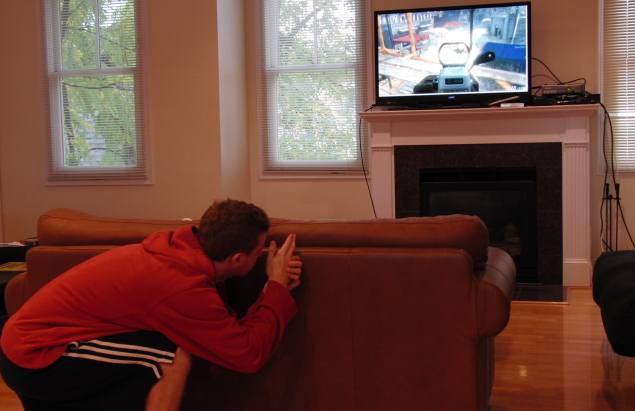 Imagine playing a video game while moving freely throughout your house.

A revolutionary new technology that uses radio signals to track a person through walls and obstructions could change the way video games are played, scientists say.

Researchers from the Massachusetts Institute of Technology (MIT) have developed the new high-resolution, 3D motion tracking system dubbed "WiTrack," which can pinpoint a person's 3-D location to within 10 to 20 centimetres - about the width of an adult hand.

"Imagine playing an interactive video game that transforms your entire home into a virtual world. The game console tracks you as you run down real hallways away from video game enemies, or as you hide from other players behind couches and walls. This is what WiTrack can bring to video gaming," said Dina Katabi, a professor of computer science and engineering and co-director of the MIT Centre for Wireless Networks and Mobile Computing.

Earlier this year, Katabi and her graduate student Fadel Adib unveiled WiVi, a system that detects humans through walls and can track the direction of their movement using Wi-Fi signals.

( Also see: Low-cost 'nano-camera' developed that can operate at the speed of light )

Based on this earlier work, Katabi and Adib developed WiTrack in collaboration with Rob Miller, a professor of computer science and engineering, and graduate student Zach Kabelac.

In comparison to WiVi, WiTrack has significantly higher accuracy and can track both two-dimensional and three-dimensional movement using specialised radio waves, as opposed to Wi-Fi signals.

WiTrack operates by tracking specialised radio signals reflected off a person's body to pinpoint location and movement. The system uses multiple antennas: one for transmitting signals and three for receiving.

WiTrack is able to locate motion with significantly increased accuracy, as opposed to tracking devices that rely on wireless signals, said Adib.

The system's ability to track motion through obstructions could make it particularly useful not only in gaming, but also in tracking elderly patients at high risk of falling.

While WiTrack does not require individuals to wear sensors or install cameras, it can still detect falls with very high accuracy.
Comments