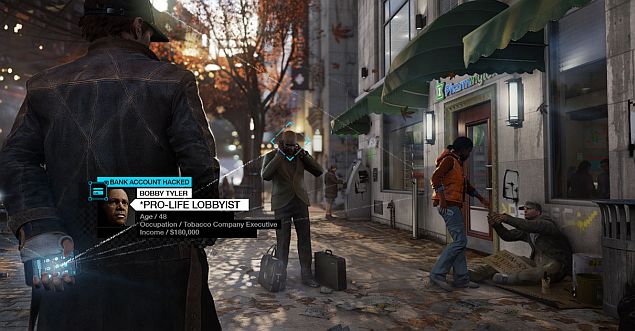 Watch Dogs, one of the most-awaited games of 2014, is all set to be launched at midnight on May 27 in India. The open-world hacking-based action game created and published by Ubisoft is launching for Windows, PlayStation 3, PlayStation 4, Xbox 360 and Xbox One.

The Nintendo's Wii U version of Watch Dogs is set to arrive later this year. The game's midnight launch events will kick off a few hours from now, starting at 11:30pm across major cities in India at several different retail outlets.

Games The Shop stores would make the third-person shooter game available in Oberoi Mall in Goregaon, Infiniti 2 in Malad and R City in Ghatkopar. Landmark stores would also launch the title in its stores at Infiniti Andheri and Inorbit Vashi. Gamers in Pune, Bangalore and Delhi can visit Landmark stores at SGS Mall, Orion and Forum Mall, and Ambience Mall (Vasant Kunj) respectively.

According to IGN, Yves Guillemot, CEO Ubisoft, recently stated that he is expecting Watch Dogs to cross the 6 million unit sales. It has been also understood that after its release, the game will receive a DLC, which will be available via a season pass. The DLC is said to come with new single-player story, characters, missions and weapons.

In Watch Dogs, the player-controlled anti-hero can access everything from the cellphone conversations and medical records of passers-by to computers which control traffic lights, to advance through the game.

Set in Chicago, the game centres on Aiden Pearce, who uses his smartphone to access the city's Central Operating System, which controls everything from power grids and traffic management technology to bank accounts and phone networks.

In Watch Dogs, Pearce starts off seeking revenge for a loved one, but as he finds out more about the city, through hacking into its systems and inhabitants, he becomes a "vigilante."