Watch Dogs 2, the second instalment in Ubisoft’s third-person open-world hacking franchise, is now available on PlayStation 4 and Xbox One. The sequel drops the broody tone of the first entry – where the protagonist Aiden Pearce sought revenge after his niece’s death, and was set in a grim perennially-greyscale Chicago – for a more fun-filled adventure involving a suave hacker called Marcus Holloway and the blue skies and colourful environments of San Francisco Bay Area. Plus, drones!

In our review of the game, we found Watch Dogs 2 has better driving mechanics than the original, extra mobility during traversal, and satisfying mini-games. That said, the story could have been better. Performance wise, the game does suffer from “occasional texture pop-in” on the PS4, and it doesn’t look any better on the PS4 Pro. 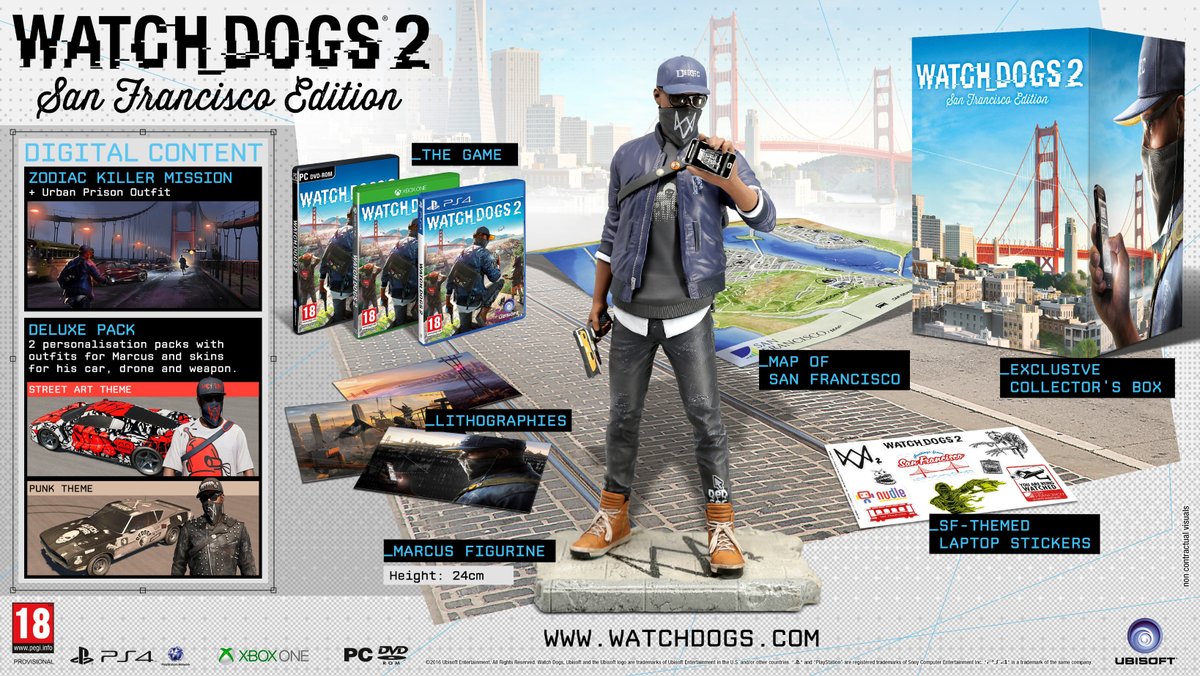 You can also go for the Collector’s Edition, if you wish to go all out. The Watch Dogs 2 San Francisco Edition, as it’s called, gets you lithographies, a 24cm Marcus Holloway figure, a map of San Francisco, San Francisco-themed laptop stickers, and an exclusive collector's box in addition to the base game. That will cost you Rs. 7,999 on consoles and Rs. 7,499 on PC.

Two other game editions – Wrench Junior Robot Collector's Pack, and Return of DedSec Collector's Case – announced at launch back in June and exclusive to the Uplay Store, now return a 404 error on the website. Either they are sold out or have been removed.

If you’re looking to buy Watch Dogs 2 on disc in India, you might run into supply issues as copies imported into the country are likely to be exported to the Gulf nations, where Ubisoft hasn’t released the game owing to “cultural sensitive content”.

For PC gamers, it’s a different issue entirely when it comes to retail. Sources close to Gadgets 360 have said that Ubisoft won’t be bringing “physical editions of PC games going forward”. Your only option to get it at retail is the aforementioned San Francisco Edition, which isn’t up for pre-order yet.

And if you do end up picking up the game on disc, you’ll need to download a day-one 2.3GB update to be able to play. If you buy it digitally, you’re looking at a 27.6GB download on PS4, 30.8GB on Xbox One, and will need 50GB free space to install on PC.

Further reading: Watch Dogs, Watch Dogs 2, Ubisoft
Akhil Arora Email Akhil Akhil Arora covers entertainment for Gadgets 360, interviewing stars such as Christian Bale and Anurag Kashyap, covering series premieres, product and service launches across the globe, and looking at American blockbusters and Indian dramas from a global socio-political and feminist perspective. As a Rotten Tomatoes-certified film critic, Akhil has reviewed over 150 movies and TV shows in over half a decade at Gadgets 360. When he is not completely caught up with new film and TV releases, Akhil ...More
Samsung Galaxy S8 Tipped to Sport Pressure-Sensitive Display
Apple Pay Expands to Charities, Samsung Pay to Offer Rewards