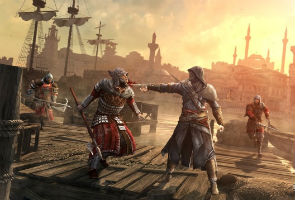 Highlights
If Ubisoft's 2010 E3 presentation was a disaster, 2011 more than made up for it with some really cool trailers of Driver San Francisco, an extended gameplay demo of Ghost Recon Future Soldier, Trackmania 2, Just dance 3 and Rocksmits, a music game that teaches you to play a real guitar.

Impressed? There's more. Blistering blue barnacles, it's a Tintin game based on the upcoming movie. Players will not only don the role of the intrepid boy reporter, but also the role of his faithful canine companion, Snowy, as well. Ubisoft also went the Inglorious Bastards way and showed of some crazy Nazi killing in Brothers in Arm: Furious 4.

To celebrate their 25 years of gaming,  Ubisoft showed off an old classic remade for new gen gaming hardware. Rayman Origins will make an appearance on current gen hardware and will have an array of environments and multiplayer support.

The second biggest surprise of the show has to be the reveal trailer of Far Cry 3. Completely unexpected, and boy oh boy, was it good.

But they saved the best for last. Ubisoft closed the conference with a bang - a trailer of Assassins Creed Revelations and a playable demo as well. The final chapter in Ezio's saga, the gameplay showed off new mechanics and Ezio's new arsenal of weapons which includes smoke bombs and explosives. Grab this masterpiece when it launches in November 2012.

That's it from Ubisoft press briefing but stay tuned as we will bring you the complete E3 2011 coverage.