The fourth edition of Maxis' successful life-simulating game will include more emotional versions of the virtual people whose lives and homes players can manipulate. This time around, "The Sims 4" producer Lyndsay Pearson said the developers have focused on crafting more believable Sims who can perform multiple actions - like walking and talking - at once.

While the Sims have always been an emotional bunch, they'll be guided by their moods even more in "The Sims 4," set for release next year for PC. During a demonstration of the game at Electronic Arts' offices last week, a Sim named Andre felt jealous when his pal Ollie began flirting with a female Sim. He intervened but became depressed once his advances were dismissed. He then opted to blow off steam by boxing.

"The key to The Sims 4 emotions is that there isn't anything particularly better or worse," said Pearson. "You have the ability of what to do with that emotion. If your Sim is furious, that may seem like a bad thing, but it actually means they can write a special book or paint a special painting or go for a really good run and have a really great workout."

The sequel will also make it easier for players to build homes for their Sims by picking pre-designed rooms and plopping them together to create a house. The abodes can then be filled with furniture and other items that inspire different emotions in the Sims. Some items can only be earned when Sims meet certain goals, either personally and professionally.

"The Sims 4" includes 18 touch points on the Sims' bodies, which can be sculpted to create custom faces and physiques. The developers have also added new locales for the virtual people to "WooHoo," the franchise's cheeky term for sexual intercourse. For example, Ollie eventually ended up getting it on with that female Sim in a rocket ship parked in his backyard. 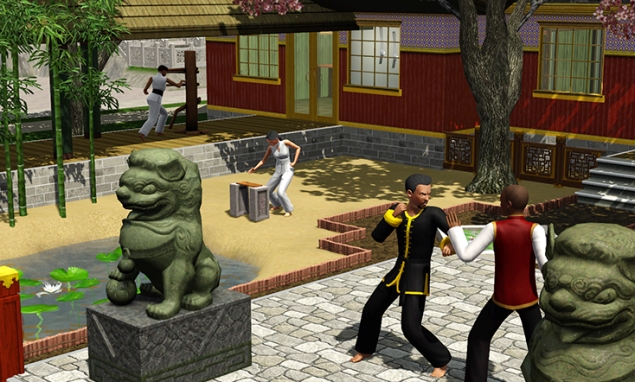 The Sims 4 and The Sims in general has always had a really good sense of humor," said Pearson, who has worked on the franchise for 10 years. "For us, that's an opportunity for new places for your Sims to have a little bit of fun and WooHoo and maybe new ways to die. All of those things are funny parts of the game we've maintained in The Sims 4.'"

Pearson said "The Sims" franchise has now sold more than 170 million copies worldwide, cementing the 13-year-old people simulator by Electronic Arts Inc. as the top-selling PC game franchise. "The Sims 3," the previous installment launched in 2009, and 10 expansion packs, which add themed settings and features to the original game, have since been released.

"The Sims 4" follows the chaotic reboot of "SimCity" from EA and Maxis last March. The updated edition of the 24-year-old city-building franchise required gamers to play online even if they weren't interacting with other players. Several gamers weren't able to log on after the game debuted, prompting some retailers to stop selling the game.

Pearson declined to comment on what the developers learned from the botched launch of "SimCity," which went on to sell 2 million copies, according to EA. She noted that "The Sims 4" would be an offline single-player experience, although players will still be able to exchange virtual creations much the same way they did in previous editions of "The Sims."

Further reading: Electronic Arts, SimCity, The Sims, The Sims 4, gaming
HTC One to get Android 4.3 by end of September
Guardian says Britain forced it to destroy Snowden material