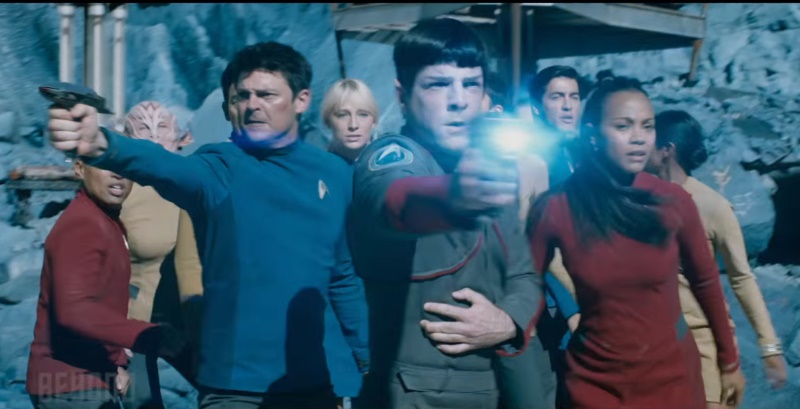 Highlights
It looks like the trippiest episode of Star Trek ever created.

On the bridge of a starship resembling the Enterprise from director J.J. Abrams' Trek films, that series' Dr. McCoy is at the engineering station frantically beaming up survivors of an attack, while former Borg tinkerer Seven of Nine from Star Trek: Voyager is firing torpedoes at a Klingon vessel. They're both taking orders from Star Trek: The Next Generation chief engineer Geordi La Forge. He's sitting in the captain's chair, but he looks like a woman.

"Keep us in range of that Klingon," orders La Forge.

"Do you need some engine power for that?" asks McCoy.

The out-of-this-world Trek mash-up isn't occurring on a soundstage. The actors - Karl Urban, Jeri Ryan and LeVar Burton - are playing a mission from Star Trek: Bridge Crew, the sci-fi franchise's first-ever virtual reality game being created by publisher Ubisoft and developer Red Storm Entertainment. The interactive four-player experience casts players as the captain or either a tactical, engineering or helm officer aboard the starship Aegis.

"This wasn't anything like you see on the show," said Ryan, a cast member on Voyager for four seasons. "When we were shooting it, the bridge set was all plywood and plastic. When you're looking at the ship's monitors, they were either green screens or just big openings in the walls. This was incredible. It's what it would be like if it were real."

The stars from various Trek editions gathered earlier this month to don Oculus Rift headsets and play in front of cameras for a promotional video for the game's unveiling Monday at the Electronic Entertainment Expo, the interactive industry's annual trade show. Burton, who portrayed visor-clad La Forge in seven TV seasons and four films, lit up when he realized he could not only sit in the captain's chair but that his avatar could be female.

"That's what Star Trek is all about," said Burton. "It's infinite diversity in infinite combinations and a respect for all life. I think it's great to be able to role-play. ('Trek' creator) Gene Roddenberry's vision was one I always gravitated toward because it acknowledged me as a black kid growing up in Northern California. If I hadn't been in the cast, I would be a fan."

Bridge Crew utilizes a VR headset and hand-held controllers to boldly mimic seated players' heads and hands on the virtual bridge, providing 360-degree views and the ability to complete such tasks as activating the warp drive, scanning foreign objects in space and broadcasting relevant imagery to the ship's viewscreen. Urban, whose character rarely mashes buttons on the bridge, came away with an appreciation for his cast mates.

"In a funny kind of way, it gave me a new understanding for the reality of what we as actors pretend to do in our jobs," said Urban, who will reprise his role as McCoy on the big screen in Star Trek Beyond on July 22. "When you're playing the game, it's almost like you're not pretending. You're actually doing it. In some ways, it's one step closer to the experience."

The game is set in Abrams' rendition of the Trek universe, where the Aegis is tasked with exploring an uncharted sector of space called The Trench in hopes of finding a suitable new home world for the population of Vulcan, which was obliterated in the 2009 film. The developers replicated the film's sleek visual style for their starship, but they crafted their own precise method of how operating a bridge on a Federation vessel would actually work.

"At first, people might think you're just pushing buttons and that's lame," said David Votypka, senior creative director at Red Storm. "However, it's what the buttons do that makes it cool. You're on a Federation starship firing torpedoes, raising shields and turning on the red alert. That's an awesome sensation, especially when you're playing in VR with friends."

Votypka said the Aegis is about 90 percent similar to the Enterprise, although the developers tilted the bridge stations so players could more easily reach gadgetry and better see fellow crew members in VR. He noted that the game's missions, which will be both story-focused and randomly generated, won't solely focus on blasting Romulans and Klingons out of the sky. Bridge Crew players will have to work together during both combat and exploration.

"It's up to you if you want to try the Kirk approach or be more methodical," said Votypka. "The game is more about how you and your crew approach situations. It's not binary. Is it more important to save the Vulcan scientists or rescue everyone on the planet? It might be too difficult to do both. It's just like the show. There's not any one right answer."

Bridge Crew is set to launch this fall for Oculus Rift, HTC Vive and PlayStation VR.