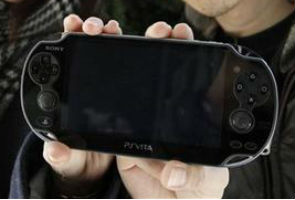 Highlights
Sony's long-awaited PlayStation Vita portable game machine hit stores in Japan on Saturday as thousands of game enthusiasts lined up early in the morning to be among the first to buy it.

Sony Computer Entertainment Inc. is predicting brisk sales, even though the launch may have missed some holiday shoppers. A successful debut would help the company offset the rest of its struggling business. Sony projects a loss of more than $1 billion for the fiscal year through March 2012, which would be its fourth straight annual loss.

In Tokyo's Ikebukuro shopping district, some 300 game enthusiasts lined up outside a major electronics chain that opened a few hours earlier than usual for the event. Many of the purchasers had made advance orders on the Internet so they could start playing immediately.

The device is a touch-interface and motion-sensitive handheld seen as a successor to the PlayStation Portable. Gamers can connect over cellphone networks and Wi-Fi hotspots, and use GPS location-tracking technology.

Television footage showed some shoppers unwrapping their new purchases and starting to try them out at the store.

"I'm so happy to see so many people lining up for PS Vita so early in the morning," Sony Computer Entertainment Japan President Hiroshi Kono wrote in his official blog after touring several Tokyo stores. "I can tell they had anxiously waited for today's launch."

For the Tokyo-based electronics and entertainment giant, the Vita is the biggest product launch since the PlayStation 3 console five years ago. It's also accompanied by two dozen software products - the largest number of launch titles in PlayStation history.

The Vita has front and back cameras, a touchscreen in front, a touch pad on the back and two knob-like joysticks. It will enable gamers to play against each other using PlayStation 3 consoles over the Internet-based PlayStation Network, a system that was hit with a massive hacking attack earlier this year.

Vita's launch will heat up competition with rival Nintendo Co.'s 3DS. Nintendo Co.'s 3DS had a disappointing start despite the company's efforts to market its 3-D technology, with critics complaining about a lack of interesting games. Nintendo ended up slashing prices on the 3DS within six months.

The companies are challenged by the rise of smartphones and tablets, through which casual gamers play inexpensive and simple games like the mega-hit "Angry Birds."

The PS Vita goes on sale in North America and Europe on Feb. 22.
Comments