Sony to restore PlayStation Network by end of May 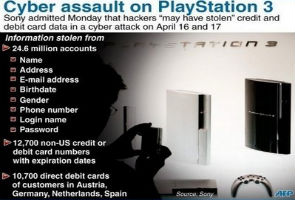 Highlights
Sony said on Tuesday it aimed to fully restore its PlayStation Network, which was shut down after a massive security breach affecting over 100 million online accounts, by the end of May.

He said Sony has not received any reports of illegal uses of stolen information, and the company is continuing its probe into the hacker attack. He declined to give details on the investigation.

Sony shut down the PlayStation network, a system that links gamers worldwide in live play, on April 20 after discovering the security breach. The network also allows users to upgrade and download games and other content.

Sony was under heavy criticism over its handling of the network intrusion. The company did not notify consumers of the breach until April 26 even though it began investigating unusual activity on the network since April 19.

Last month, U.S. lawyers filed a lawsuit against Sony on behalf of lead plaintiff Kristopher Johns for negligent protection of personal data and failure to inform players in a timely fashion that their credit card information may have been stolen. The lawsuit seeks class-action status.