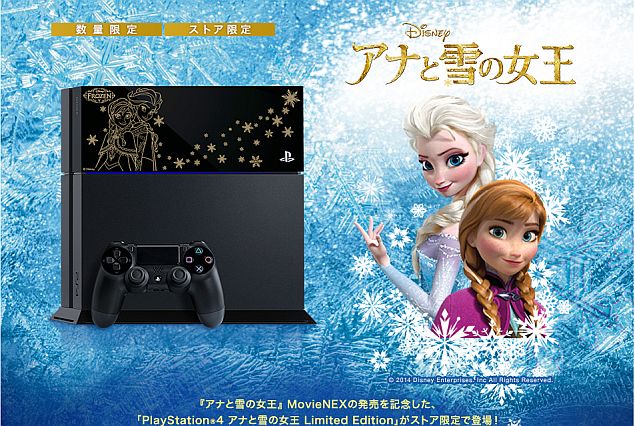 After announcing its PlayStation Now features at the E3 2014 event, Sony announced a limited edition Frozen-themed PlayStation 4 console for Japan.

This version comes as a tie-up between Sony and Disney under which the tech firm will release its 'Frozen' PlayStation 4 console on the same date as the Frozen movie's DVD and Blu-ray version in Japan - July 16.

Priced at JPY 42,980 (roughly Rs. 25,438), Sony's Frozen PlayStation 4 console comes with a golden snowflake design along with lead characters of the movie - Elsa and Anna - carved on the console's glossy area. The innards however remain the same as the regular version.

To recall, the Sony PS4 is powered by an integrated CPU-GPU design, featuring a 8-core low power x86-64 AMD "Jaguar" CPU, coupled with a 1.84 TFLOPS AMD Radeon GPU. It also features a secondary processor that does the network processing tasks in standby mode, in order to optimise power consumption.

The PS4 features 8GB of GDDR5 RAM for memory, coupled with a 500GB hard disk drive. Also onboard is a Blu-ray disc and DVD drive. Connectivity options include 2 USB 3.0 ports, one AUX port, an Ethernet port, Wi-Fi 802.11 b/g/n, Bluetooth 2.1 (EDR), an HDMI out port, and an optical-out port.

It is worth noting that Sony is not new to creating such themed PlayStation consoles. More details for the 'Frozen' PlayStation 4 console can be found on the firm's Japanese website.

Last month, Sony unveiled new details regarding the game pre-loading featurethat came with the PlayStation 4 system software update v1.70. It was announced that Transformers: Rise of the Dark Spark video game will the first to get the auto pre-load feature.

The game pre-loading feature allows users to download pre-ordered games near their release. The pre-loaded games cannot be played until release day, when they will be unlocked. The feature, available on other platforms (such as Steam), is meant to help enthusiastic gamers save downloading time on launch day.