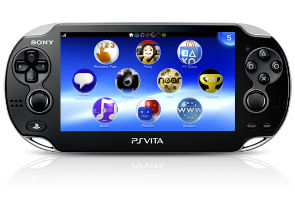 Vita hit the stores earlier this year and is the latest in a long line of mobile gaming gadgets in the spirit of Nintendo's Game Boy and Atari's Lynx.

The device has met scepticism among some analysts who doubt whether there is a place for such a device in a market which is increasingly dominated by games played on smartphones and tablets.

"Worldwide, the Vita is pretty much along where we would expect it to be, maybe trending behind in certain territories," Hirai told Reuters on the sidelines of IFA, Europe's biggest consumer trade show, held in Berlin.

He declined to disclose where sales were lagging.

Taking the helm at Sony in April, Hirai vowed to revive the fortunes of the maker of the Walkman music player, after years of competition from foreign rivals overturned its dominance in consumer electronics.

Hirai said the group was ahead of plan in turning its loss-making TV business into the black.

He has announced cost cuts, including slashing 10,000 jobs, and plans to sell off some business.

Hirai said it was already in talks with several potential buyers for its chemicals business, which makes material used in its consumer electronic products and employs several thousands of staff. He declined to elaborate.