Sonic Mania Not Available on Xbox One in India

Retro-styled platform Sonic Mania is a welcome return to form for Sega’s mascot. The game is available internationally via digital storefronts for the PS4, PC (via Steam), Xbox One, and Nintendo Switch. If you’re in India and own an Xbox One, you’re out of luck. Sonic Mania is not on the Indian Xbox Store. Searching for the game on the Xbox One, Xbox website or the Xbox app via smartphone throws up a “no results for this category” message.

This isn’t the first time digital-only games haven’t made it to the Xbox Store for India. The likes of indie darlings Firewatch and Virginia could not be purchased by Indian Xbox One owners either.

PS4 and PS3 Exclusive Persona 5 Not Coming to India

However with Sonic Mania being as high-profile as it is, it does raise a host of questions about Microsoft and Sega’s intentions for the market. It probably reflects the state of the Indian console space as well with Sony having a near monopoly on mindshare and console sales.

Nonetheless, with Xbox having an Indian presence, even its own exclusives don’t release at local retail, such as Dead Rising 4 and the Xbox One S hasn't even been announced for the country yet. In the past Sega-produced titles like Persona 5 skipped India too. 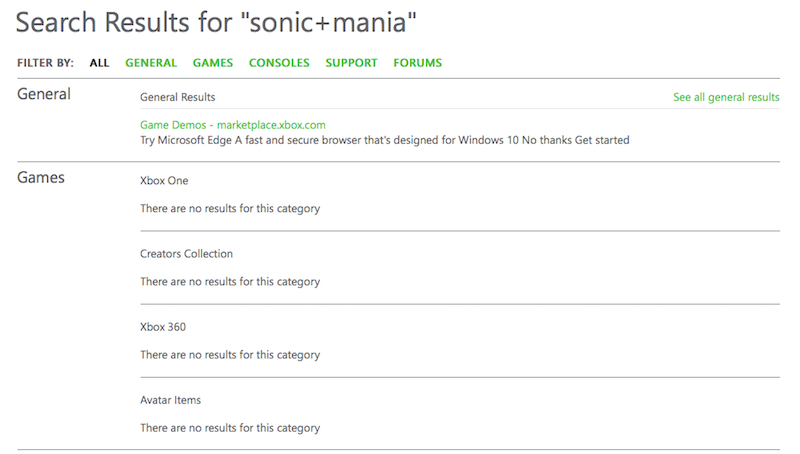 If you must, absolutely play Sonic Mania on the Xbox One and live in India, there is a fix involving changing your region. You can check out our handy guide here.

We’ve reached out to Sega and Microsoft for comment and will update this story the moment we hear from either company.

Sonic Mania Not Available on Xbox One in India
Comment