'Sim City' gets rebuilt for 2013 with modern look 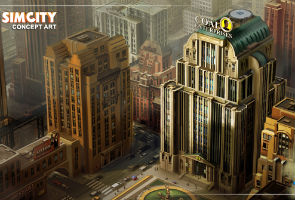 Highlights
"Sim City" is going back to its roots. The classic city building game that first came out in 1989, is returning next year in a new version that has a modern-day look and feel but is being built by those who worked on the original.

Lucy Bradshaw, senior vice president of gamemaker Electronic Arts' Maxis Label which was behind the hits "Sim City 2000" and "Sim City 3000," said both purists and newcomers should enjoy the upcoming game that she described as the most realistic "Sim City" title yet.

The studio has not put out a Sims game since "Sims 4" in 2004, but Bradshaw said EA had been considering reinventing the game for years. The new PC game will be out sometime in 2013.

"Anytime we'd release any Sims game, the first comment from fans on the Internet would be 'please make Sim City,' she said.

The new game, which was unveiled at this week's Game Developers Conference in San Francisco, will be brought up to current-day speed with environmental issues affecting construction and mayors dealing with climate change, renewable energy and natural disasters as they build their cities.

Decisions as a city builder will have more pronounced effects on Sim City residents than ever. If a player chooses to make a town economically reliant on coal mining, for example, the city will have to invest in building hospitals to keep residents from getting sick and fleeing.

"The choices that you make will affect the lives of the Sims who are there," Bradshaw said, "and you might start to see some residents protesting at City Hall."

What happens in one city can also affect a friend's town. The game will have online features where one person can play side by side with friends who are mayors of their own cities. All players globally can compete in rankings to be the greenest, the dirtiest, the fittest, or the best city in which to live.

Even though it's been years since the last "Sim City" game, the market for building games has not gone away. Zynga's "CityVille" game on Facebook has shown that millions of people want to control their own towns and work with their friends at the same time.

When asked about "CityVille," Bradshaw said the new simulation technology powering the game called "GlassBox" which EA is showing off this week at the Game Developers Conference in San Francisco, is in a league of its own. "We invented the genre and it's so far ahead of any city builder game I've ever seen," she said.

While "Sim City" tackles urban planning issues, Bradshaw said the team made sure to design twists that players won't find in any textbook. "While it is about managing your resources correctly, a giant lizard may troll around the corner and take out a few buildings and you'll have to deal with that."