Samsung unveils Smartphone GamePad controller for Android 4.1 and above devices 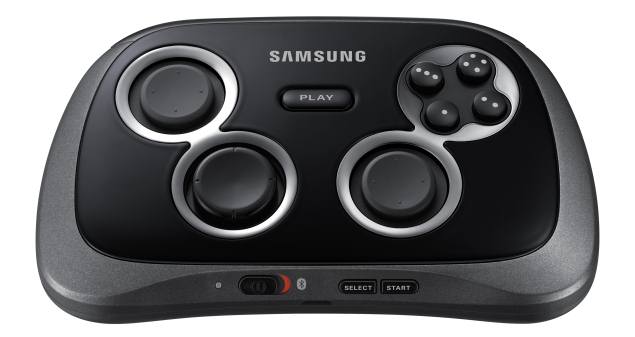 After great success in the smartphone market, Samsung is now pushing forward to smartphone accessories, in this case, a peripheral. It has announced the 'Smartphone GamePad' wireless game controller for smartphones and tablets running Android 4.1, with Bluetooth connectivity.

The company says that the Smartphone GamePad has been optimized to work best with Samsung's own Galaxy lineup and can be best experienced with devices such as the Note 2, Note 3, Galaxy S III and the Galaxy S4.

Samsung's Smartphone GamePad will initially only be available in select European countries, but the company hasn't yet specified the regions or the pricing. The company does mention it will be rolling it out to other markets soon.

The GamePad is attachable to Android smartphones ranging from 4-inch to 6.3-inch. The Samsung Smartphone GamePad includes Bluetooth and NFC support for other smartphones and tablets as well, enabling easy device pairing. Users can also utilize an HDMI cable connection to mirror the display on larger screen TVs, or use the AllShare app support for wireless display mirroring, requiring Android 4.3 Jelly Bean and above.

The Smartphone GamePad has to be used in conjunction with the 'Mobile Console' app, which can be downloaded from the Samsung App store. Through the app, users can launch, browse and buy supported games. There are 35 compatible games available at launch, with more promised by the company in 2014. Games include EA's Need for Speed Most Wanted, Gameloft's Asphalt8: Airborne, Modern Combat 4: Zero Hour, and SEGA's Virtual Tennis Challenge.

At just 195 grams, the GamePad features an eight way D-pad, two analog sticks, four action buttons, two trigger buttons, a select button, a start button and a 'play' button. The last is a feature that is exclusive to the Samsung Galaxy family, at least those Galaxy smartphones with Android 4.3 and NFC compatibility. When pressed, the 'play' button will quickly pair with the Galaxy smartphone over an NFC tag, while opening the Mobile Console app.
Comments