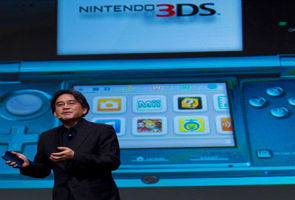 I fear our business is dividing in a way that that threatens the continued employment of those of us who make games, said Satoru Iwata during a keynote address at the Game Developers Conference in San Francisco. Is maintaining high value games a top priority, or not?

The emergence of low-cost video games for smartphones has led to a major shift in the way that many people experience video games. And for a company like Nintendo, whose strategy has long relied on converting non-gamers with non-threatening offerings like Tetris and the Wii, the popularity of casual smartphone games like Angry Birds is particularly ominous.

This threat was underscored just minutes after Iwata finished speaking, when Steven P. Jobs took the stage at the Yerba Buena Center for the Arts just across the street to introduce a new version of the iPad. Among the new features of the iPad was a gyroscope, which game developers have already been using to make games for the iPhone.

While smartphone games have caught on for their ease of use and low price, video game console makers have looked to distinguish themselves by creating devices that do things that phones cannot. Nintendo s biggest response has been the 3DS, a portable 3-D gaming device that does not require glasses. The 3DS, which sold out in Japan within days of its introduction there last week, will be available in the United States on March 27. Mr. Iwata s presentation at the conference focused largely on the new device; he announced that the 3DS will have new versions of two of Nintendo s most popular titles Super Mario and the Legend of Zelda but that they will not be ready until several months after the game is sold in the United States.

In his address, Mr. Iwata said that video games for smartphones were generally of lower quality, and that their low costs would rarely pay for the development of quality games. He also argued that a company like Nintendo, which makes both hardware and software for gaming, would always be a better ally for developers than phone manufacturers.

When I look at retailers and I see the $1 and free software, I have to determine that the owner doesn t care about the high value of software at all, Iwata said.

Still, the rapidly increasing smartphone market is proving irresistible to game developers, industry analysts said. And the ubiquity of the devices is undermining the economic argument to designing more expensive games for smaller audiences.

There s no doubt, in my mind at least, that these smartphones are legitimate game platforms and legitimate competitors, said Colin Sebastian, an analyst with Lazard Capital Markets. That argument gets harder for Nintendo to make every year.

Meanwhile, Nintendo is moving beyond gaming with the 3DS, much as it has done with the Wii. Nintendo announced Wednesday that the 3DS will be able to stream content from Netflix. Users will also be able to pause a movie on the 3DS and restart it at the same point on a Wii, or vice versa. Nintendo is also working with movie studios to show 3-D versions of trailers on the devices. Green Lantern, which will premier in June, will be the first such trailer available.