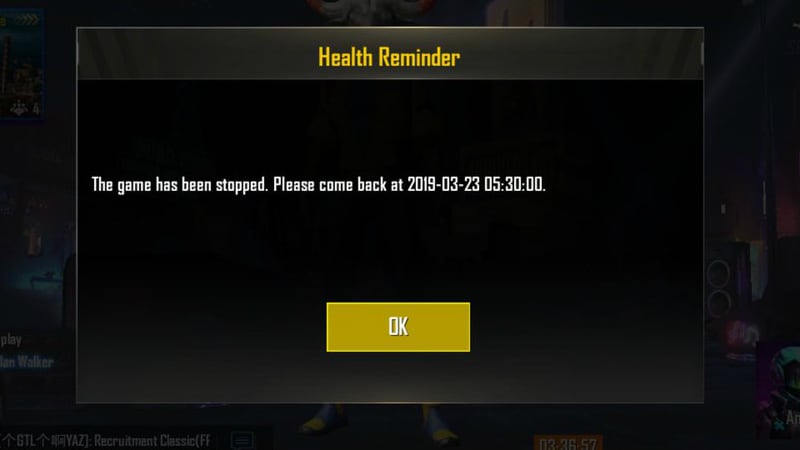 Gujarat government issued a directive in January to ban PlayerUnknown's Battleground mobile game in several districts, citing an addiction amongst players. The PUBG ban later resulted in the arrest of 10 people in Rajkot for playing the game. The game makers have been looking at ways to avoid the ban and the arrests, and its first attempt is by sending ‘health reminders' to game players. This new feature activates when a player is using the app for too long. The Health Reminder feature stops the game and asks the player to come back after a stipulated time.

In the past couple of days, PUBG Mobile players from India have been posting screenshots of this new Health Reminder feature on Twitter. If activated, this feature limits play time of the users and asks them to come back after an interval. At first, the game requests users to activate ‘Health Reminders' if they are below 18 years of age. Once activated, this feature stops the game if the user plays it for more than six hours. Some users are even seeing the reminder in a two-hour interval as well. It then asks the user to come back to the game later. There is no reversal or bypass option reported so far.

These Health Reminders have been attracting mixed reactions, with many PUBG Mobile players unhappy at their game suddenly being stopped. Some users claim that the reminder shows up even if they are above 18 years of age.

Regarding the ban, PUBG Mobile makers had earlier issued a statement saying that it would work with the government to ensure that it is enjoyed in a healthy and responsible manner. “In consonance with our endeavour to continue promoting responsible gaming experience, we are working on the introduction of a healthy gameplay system in India to promote balanced, responsible gaming, including limiting play time for under-aged players,” Tencent Games said in a statement.

As mentioned, Rajkot police arrested 10 players for playing the mobile game earlier this month, after it being banned in Gujarat. The Rajkot police also seized the mobile phones of the players for "purpose of investigation" going as far as to state that players were so engrossed in PUBG Mobile that they did not see the police approach them.

Apple's Tim Cook Urges China to Continue to Open Up Its Economy
Clippy, Microsoft's Office Assistant, Makes a Brief Reappearance Before Being Killed Off Again