PUBG Mobile has not been banned in India, as rumours may have you believe. The fake news could be taken as a nod to the game's popularity in the country. An image of what seems to be a legal notice has been doing the rounds on Facebook stating that PUBG Mobile has been banned in India. It mentions how PUBG Mobile is "creating alot (sic) of nuisance and irrespective activities (sic) and many students spoiling their own lives". If the poorly constructed sentences weren't a dead giveaway, this PUBG Mobile notice appears to be issued by the "High Court of Maharashtra". While it might sound legitimate, there's no such judicial body. It's signed by a K. Srinivasulu who appears to have the designation of a prejudge. Not only is the post of a prejudge non-existent in the Indian judicial system, a quick Google search suggests that there's no judge by this name which Gadgets 360 confirmed after checking with a few Bombay High Court lawyers.

While Tencent, the game's publisher in India has yet to respond to Gadgets 360's request for comment, several e-sports and game expo organisers speaking to Gadgets 360 have said that the game hasn't been banned. In fact it plays an important part in their upcoming events.

"We haven't heard anything from Tencent about a ban and it seems unlikely," a Mumbai-based e-sports organiser tells us on the condition of anonymity. "We're probably going to have it at our 2019 events because it pulls in crowds." 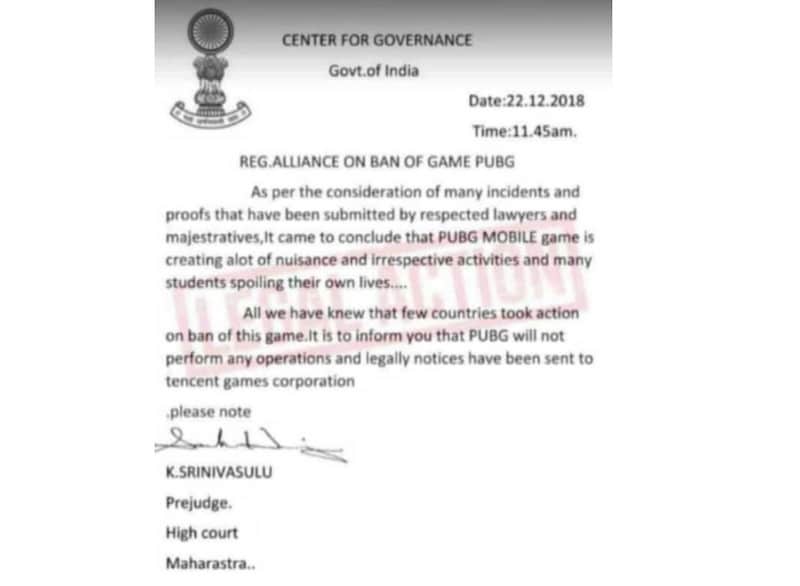 Suffice to say, the PUBG Mobile ban notice is fake news. It's unclear where this hoax originated from although it has been shared on Facebook and Twitter. Perhaps its a nod to the game's popularity in the country. According to a recent study from free Internet provider Jana on its mCent browser app, nearly 62 percent of the 1,047 Indian respondents in a survey said they played PUBG Mobile. This makes it about three times the next most popular game, Free Fire.

These numbers are inline with PUBG Mobile's popularity globally. Outside of China, PUBG Mobile now has 30 million daily active users and has hit 200 million downloads, Tencent said in a statement. However, the 200 million downloads number doesn't paint an accurate picture of how many people play the game. The daily active users is a metric people should look at to gauge PUBG Mobile's popularity and even that number is very high at 30 million.

These figures highlight how popular PUBG Mobile is across the world. The fact that PUBG Mobile runs smoothly on even low-end Android devices has boosted its popularity. Thanks to being on Android (as well as iOS), PUBG Mobile dominates Asia and China according to Sensor Tower, with the US making up only 30 percent of PUBG's revenue.

Honor V20 aka Honor View 20 Launch Set for Today, How to Watch Live Stream
PSA: Last Chance to Get Your iPhone Battery Replaced By Apple for Cheap