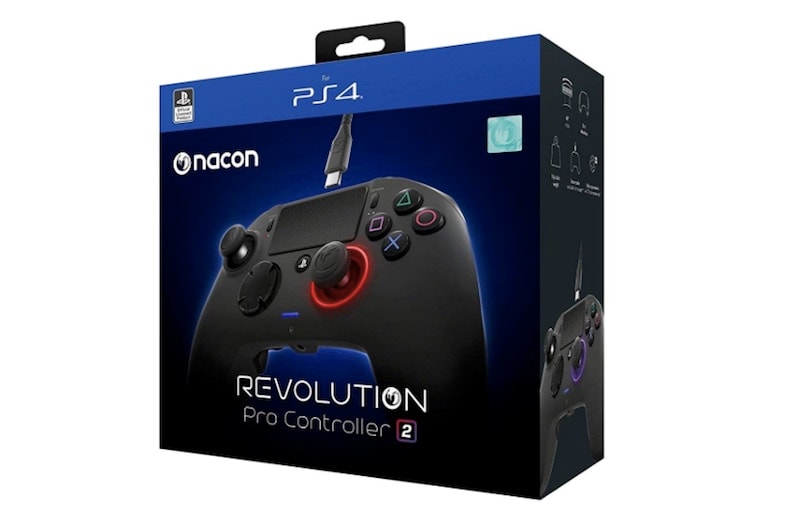 Nacon gaming peripherals are now available in India officially and are exclusive to Amazon. The e-commerce giant confirmed this to Gadgets 360 via email. Nacon is known for its PS4 controllers, particularly its Revolution range which is the PS4 equivalent of the Xbox Elite Controller. Both the Nacon Revolution Pro Controller - Version 2 and the Nacon Wired Compact Controller are currently up for sale on the site, priced at Rs. 6,999 and Rs. 2,499 respectively for Amazon Prime Day though they usually are priced at Rs. 8,999 and Rs. 2,999. This gives India's fledgling PS4 audience another option in addition to Sony's own DualShock 4 range and the Snakebyte PS4 controller. The duo are also compatible with Windows PC and macOS.

Much like the DualShock 4, the Nacon Wired Compact Controller available in a variety of colours such as orange, black, grey, red and illuminated variants of green and blue too. And unlike the Snakebyte PS4 controller, there's a 3.5mm jack allowing the use of headphones. In comparison, Sony’s official PS4 controller, the DualShock 4 is priced at Rs. 4,990 (MRP) though available at around Rs. 3,500 to Rs. 3,800 offline.

While the Nacon Wired Compact Controller seems to be gunning for budget PS4 gamer crowd with its lower price tag. That being said, it has some trade-offs, most notable of which being the lack of wireless operability. Furthermore, the build quality is yet to be ascertained. If our time with the Snakebyte controller was any indication, it's safe to say that we could see some corners cut to ensure its low price point.

That said, the Nacon Revolution Pro Controller - Version 2 is an interesting option. With the Xbox Elite Controller frequently out of stock, it seems to be positioned for PS4 owners looking to get more out of their games with adjustable triggers, weights, and shortcut buttons. With the PS4 selling as well as it has in India, with insiders suggesting that its crossed the 300,000 mark, it's great to see more options. But would you bother with either controller over the standard DualShock 4? Let us know in the comments.