PS4 Call of Duty: Infinite Warfare and Watch Dogs 2 Bundles are Coming to India: Price and Other Details

Over the course of the weekend we noticed that Sony India’s retail stores, known as Sony Centres were stocking a new PS4 bundle. This time buying a 1TB PS4 nets you the Call of Duty: Infinite Warfare Legacy Edition. According to Sony India, the PS4 Call of Duty: Infinite Warfare bundle will be available across all stores (both online and offline) by next week. A welcome change from the 500GB PS4 with Uncharted: The Nathan Drake Collection that was an offline-only bundle. 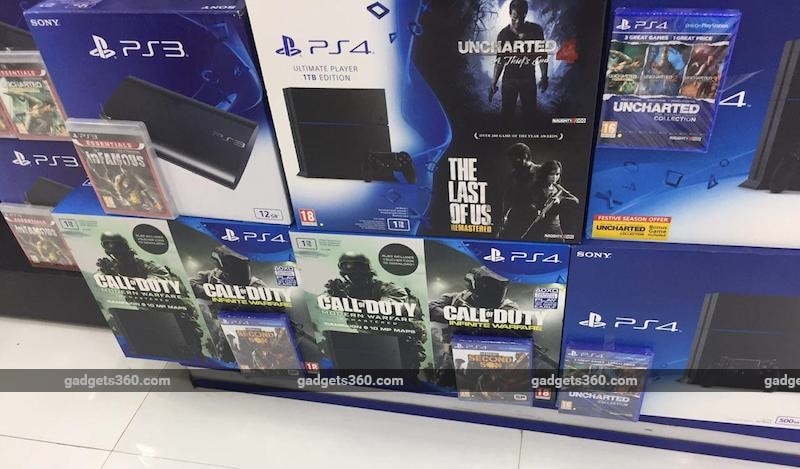 And this is not all, by mid-December the company will bring in a Watch Dogs PS4 bundle. This will include the original Watch Dogs and Watch Dogs 2 on disc along with a 1TB PS4 for Rs. 32,990. Watch Dogs 2 retails for Rs. 3,499 while the first game with all its add-on content sells Rs. 1,999. The cost of the games alone more than make up the savings. Keep in mind that these bundles come with the original 1TB PS4. Not the PS4 Slim or the PS4 Pro.

Chances are, if you’re buying a PS4, Call of Duty: Infinite Warfare or Watch Dogs 2 are already on your radar. By bundling these games with new PS4s, it is quite possible that the price of a standalone copy of either game could see a serious reduction in price to end-users. A disruptive move considering local game distributors are averse to dropping prices on games for as long as possible.

As it stands, these two offerings from Sony are leaps and bounds above its previous PS4 bundles. In the past most of the bundles we’ve seen would package in old first-party titles like Drive Club and The Last of Us. Bringing in bundles with more games is great for consumers. It will be interesting to see how Microsoft reacts to this, if at all. An Xbox One S launch in the offing maybe?

Will you pick up the PS4 with these new bundles or do you prefer the Xbox One (or One S) or are you waiting on the PS4 Pro? Let us know in the comments.

PS4 Call of Duty: Infinite Warfare and Watch Dogs 2 Bundles are Coming to India: Price and Other Details
Comment