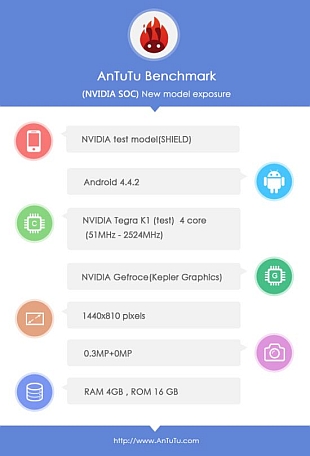 Seems like Nvidia is planning to soon introduce the next iteration of its Shield handheld gaming console. Thought to be called Nvidia Shield 2, the alleged device was spotted on AnTuTu benchmark results online.

The Android-based handheld gaming console's as-yet-unannounced upcoming version, as per the benchmark results via GforGames website, runs on Android 4.4.2 KitKat, and is powered by a 2.5GHz quad-core processor, specified as the Tegra K1 SoC.

Apart from 4GB of RAM, the results for the 'Nvidia test model (Shield)' indicate the Shield 2 will feature GeForce Kepler graphics, 16GB of inbuilt storage, a VGA camera, and a 1440x810 pixel resolution screen (GSMArena points out this could be the standard 1,440x900 resolution, subtracting 90 pixels for onscreen Android controls).

For now, there is no word on the release date, price and regional availability of the next version of Nvidia's portable console. However, we expect the portable console to go on shop floors around July, the same time when the original Nvidia Shield was introduced.

Notably, the existing Nvidia Shield portable gaming console saw the release of Portal in March, a first-person puzzle-based game. The title features a series of puzzles solved by using a 'portal gun' to teleport the player or other objects.

The Nvidia Shield portable gaming console was introduced at the CES 2013 event and went on sale in Canada and US in July.

The Shield is powered by a Tegra 4 processor coupled with 2GB of RAM. It gives access to games from Nvidia's TegraZone, Google Play and Valve's Steam. The handheld console sports a 5-inch multi-touch display with a resolution of 720x1280 pixels. However, the company claims that the portable console can play 4K videos. It also comes with 16GB of flash storage and runs Android Jelly Bean. The device also offers GPS support. The portable device also plays movies and music, stores ebooks, and can be used to surf the Web.