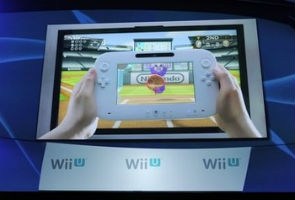 Highlights
Nintendo has announced their latest console Wii-U at the Electronic Entertainment Expo (E3) in Los Angeles but has not set a specific date for its release yet. All the company divulged was that the console would be released next year.

Nintendo showed-off some expected games, some new titles and one revolutionary controller in the form of Wii-U. Wii-U boasts of a 6-inch touchscreen with 6-axis motion controls, gyroscope, front and rear camera, cross play between your TV and Wii u (Just like airplay on the iPad and the cross play between the PSP and the PS3).

Some major titles have been announced for the Wii-U such as Metro, Assassins Creed, Darksiders 2, Tekken, Ghost Recon online, Aliens, Ninja Gaiden 3 and a whole bunch of EA games. However, the Wii doesn't have the horsepower under the hood to run these games.

In terms of the 3DS, the handheld 3D gaming console by Nintendo, there will some new features available via a software update. The update will include a virtual console giving players access to classic games optimized for the 3DS. Classic games from the Game Boy and the Game Boy Colour will be available on the virtual console. The Virtual console will also have trailers and demos of new games that are released. More 3DS games expected to launch before the end of the year include Mario Kart,Star Fox, Super Mario, Kid Icarus Uprising, Luigi's Mansion 2 and Legend of Zelda: Ocarina of Time.

Speaking of Zelda, the game celebrated its 25th year this year and Nintendo kicked-off the press event with a tribute to the series.

The 3DS will receive some major support from third party developers. Some of the games expected for the device are Resident Evil, Ace combat 3D, Tetris, Driver, Pac Man, Tekken 3D, MGS Snake Eater and more.

A special golden Wii mote will be available when Legend of Zelda Skyward Sword launches for the Wii later in 2011.
Comments