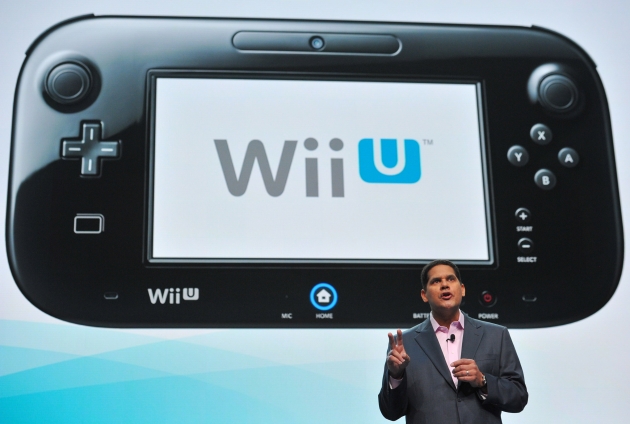 Nintendo Co Ltd will launch a console with a dedicated "Super Mario" game title for the first time in 16 years as the struggling Japanese company hopes its new Wii U will score the rave reviews that helped make its predecessor the world's biggest gaming hit.

Nintendo hopes the Wii will appeal to families as well as traditional gamers, global president Satoru Iwata said in an interview in Japanese on the sidelines of the E3 entertainment expo in Los Angeles.

Nintendo, which was knocked off its perch at the pinnacle of gaming industry hardware by Microsoft Corp's Xbox in recent years, formally unveiled a white console on Tuesday, saying it will support two "GamePad" controllers designed to look and function like tablets.

The Wii U, which will carry video content from Netflix Inc, Amazon.com Inc, Google Inc's YouTube and Hulu, will hit stores in time for the holidays. The Japanese gaming company, however, left many in the audience at its presentation on Tuesday wanting more information, especially on the cost, given that Nintendo is playing catch-up with Microsoft and Sony Corp's heavily discounted hardware.

"The device has to win support from within the family. So we have to show the benefits of the Wii U device from different angles in order to reach the mother, the father and the children," Iwata said.

The new console may face a challenge in appealing to core gamers who like to play shooter games as well as those that bowl in their living rooms and swing virtual golf clubs.

"I am still not convinced about whether they can retain the audience who bought the Wii, as well as hardcore gamers," said James Brightman, U.S. editor for the trade publication, Games Industry International.

The first console from Nintendo in six years will come with a social-gaming network dubbed "Miiverse". But it will need a vast library of software titles, including the star of its stable, "Super Mario", to have any hope of matching the Wii's success.

Nintendo is currently fending off upstart challengers like casual game makers and apps for mobile devices like Apple Inc's iPad, which are making inroads into the $78 billion videogame market.

Shigeru Miyamoto, Nintendo's famed video game designer and producer, said making deeper games is important "in this era when consumers are said to be moving to lighter games."

To protect its position, Nintendo is coming out with a new "Super Mario" game featuring its namesake plumber traversing different adventure scenarios. It spearheaded Tuesday's presentation of a batch of games intended for the Wii U, including "Nintendo Land".

"Every time a new Nintendo home console is announced, we start hearing familiar feedback from long-term fans: 'Sounds great, but you've got to have a Mario game,'" Nintendo of America president, Reggie Fils-Aime, told a packed theater at the gaming conference.

Hoping for a revolution
Analysts said Nintendo, which traces its origins back more than a century to the streets of Kyoto, badly needs a hit.

In 2011, it launched the 3DS handheld device to disappointing sales in part because it initially lacked new versions of its top games.

The original Wii revolutionized the industry in 2006 by introducing motion-controlled gaming and outsold rivals like the Microsoft Xbox and Sony PlayStation 3. But sales have been slowing, triggering the company's first annual operating loss and a major stock slide.

Nintendo shares fell 2.9 percent to 9,000 yen early on Wednesday in Tokyo compared to the 0.5 percent gain on the benchmark Nikkei. The company's shares have lost nearly 15 percent since January this year.

While investor reaction has so far been lukewarm on the Wii U, the videogame industry is embracing the first console to hit the market in years. Ubisoft said this week it is developing eight games for the Wii U's launch.

Executives at Ubisoft said the company was lured by the chance to have players use two screens in one game.

But after seeing Nintendo's presentation on Tuesday, M2 Research analyst Billy Pidgeon said Nintendo will need to work hard to explain why a second screen is necessary.

"It is kind of a complicated sell. You're asking people to play games in different ways," he said.

Nintendo is forecasting sales of 10.5 million Wii U and Wii consoles next year.

The last time Nintendo published a new "Super Mario" title when a home console was introduced was in 1996, with the Nintendo 64.

The new Wii U tablet controller will also have a headphone jack, a camera in the front allowing for video chat, and a microphone and motion gaming capabilities and trigger buttons on the back of the tablet for shooter games.

But Nintendo focused less on the hardware on Tuesday and more on the games it will bring to the Wii U. The company did not give a release date for the latest Mario game, but executives showed off different levels featuring its signature fixtures: Mario, Luigi, Yoshi and gumbas.

The company also showed off games made by other companies built for the Wii U, such as Warner Brother's "Batman Arkham City: Armored Edition."