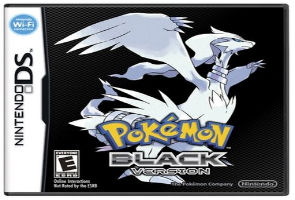 Highlights
"Pokemon" has been around almost as long as Justin Bieber has been alive. Among a certain demographic, the fierce little "pocket monsters" generate the type of obsessive fandom reserved for the biggest entertainment icons, be they the hottest new toys or dreamiest teen crooners.

The vast "Pokemon" empire is about to get even bigger with Sunday's launch of two new video games for the handheld Nintendo DS. Simply called "Pokemon Black Version" and "Pokemon White Version," they sell for $35 each.

The "Pokemon" video games center on catching, battling and trading the hundreds of colorful characters that go by the same name. As usual, the two new games are slightly different so that players can buy one and trade Pokemon characters with others to strive toward collecting them all.

The new games add more than 150 creatures to bring the total to more than 640, ranging from the purple cat creature Purrloin to dinosaur-inspired Haxorus. The latest games let players battle not just people they know, as with previous versions, but strangers through random matches using the DS's Wi-Fi connection.

"Black Version" and "White Version" are the latest for the kid-centric empire that has managed to outlive video game icons such as "Guitar Hero" and outsell big shots such as "Call of Duty." The games are rated "E" for everyone and have a broad appeal that goes well beyond grade school kids.

"I like the community feel," said Tiffany Stanley, 17, who competes in "Pokemon" tournaments along with her brother, Trey, 11. "The people who play 'Pokemon' are the nicest and most intelligent people I have ever met."

Playing the game, she added, requires creativity and originality, as well as math and strategy skills to do well.

The "Pokemon" franchise is the second-biggest video game property for Nintendo Co. and in the world, not far behind the iconic "Mario Bros." games. Worldwide, the game has sold about 215 million copies, compared with Mario's 250 million, Nintendo says.

But "Pokemon" did so in 15 years. Mario took a decade longer.

It helps that the primary system to play "Pokemon" games is the handheld Nintendo DS, the world's best-selling video game machine. Through the end of December 2010, Nintendo sold nearly 145 million DS systems in various iterations, compared with 85 million units of the Wii console.

Over the years, related "Pokemon" products have popped up, including cartoons, trading cards, comics and toys. The company that licenses the brand, Pokemon Co. International, is privately held and won't disclose revenue figures, except that, in years when there's a new game, it's in the billions of dollars.

"It's like crack to kids," said Darrin Duber-Smith, professor of marketing at the Metropolitan State College of Denver.

The popularity of "Pokemon," he added, has spread by word of mouth more than through traditional marketing. That is part of its genius.

"We have a very strong community of 'Pokemon' fans," said J.C. Smith, consumer-marketing director at Pokemon Co. International. These fans can be counted on to spread the word about "Pokemon" on offline playgrounds and on online social networks such as Twitter and Facebook.

"Pokemon" got its start in 1996 from a company called Game Freak -- a group of guys who wrote fan magazines for video games and decided to make their own, Smith said. The first game was for the original Nintendo Game Boy, and it let players interact with each other by using a cable that plugged into their friend's Game Boy. The cartoon series came the following year in Japan, and the games launched in 1998 in the U.S. and Europe.

Part of the game's staying power has been that it was built from the start as social. In this age of nonstop interactivity, the games that have been the most popular have been those that let players interact, whether that's on Facebook playing "FarmVille" or at home scheming against a common enemy on "Call of Duty."