New Life for Board Games, Thanks to High-Tech 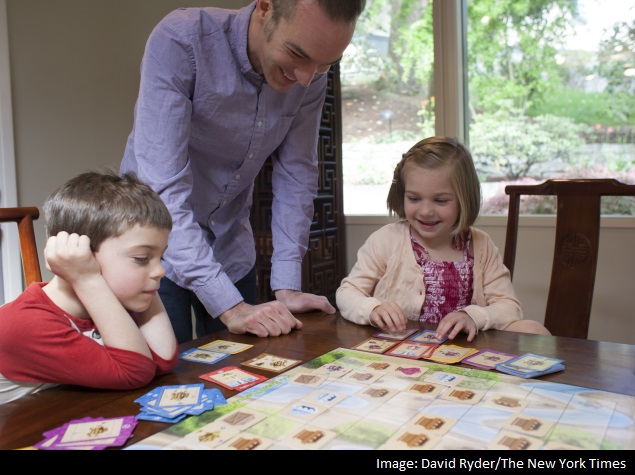 Dan Shapiro sold a company to Google and worked at Microsoft. His name is on nearly a dozen technology-related patents.

But when it came time for his latest venture, Shapiro turned to technology to produce something decidedly low-tech: a board game for children.

Technology, by all rights, should have killed old-fashioned games, which can never equal the eye-popping graphics, visceral action and immense online communities of today's video games. Yet the opposite has occurred. Largely because of new technologies, there has been a creative outpouring of games by independent designers like Shapiro.

"It has unlocked a whole generation of innovative gameplay experimentation that just wasn't feasible before," Shapiro said.

New tools now power the creation of tabletop games - many in the strategy or fantasy genres - from idea to delivery. Crowdfunding sites provide the seed money and offer an early gauge of demand. Machines like 3-D printers can rapidly create figurines, dice and other prototype game pieces. And Amazon, the online retail giant, can handle shipping and distribution, cutting out the need for middlemen.

Sales have followed. While the video game business long ago eclipsed its low-tech cousin, sales of tabletop games have continued to grow. Sales at hobby stores in the United States rose 15 to 20 percent in each of the past three years, according to ICv2, a trade publication that tracks the business. Amazon says board game sales increased by a double-digit percentage from 2012 to 2013.

On Kickstarter, the largest crowdfunding service, in which users can pledge money to finance projects, the amount of money raised last year for successfully financed tabletop games exceeded the amount raised for video games, $52.1 million to $45.3 million.

"It has been this amazing boon for the average game designer to come in, put up an idea, get it funded and get to press," said Peter Adkison, founder and former chief executive of Wizards of the Coast, a tabletop game publisher he sold to Hasbro in 2001.

After he came up with the idea, Shapiro raised $631,000 on Kickstarter in just under a month, far exceeding his $25,000 goal. Robot Turtles has more backers than any other tabletop game in Kickstarter's history, with 13,765 people pitching in money for the project, and Shapiro had more than 20,000 presales on the site.

Shapiro then found a game manufacturer in Michigan by doing a Google search, and paid it to make 25,000 copies of the game from more than 36 tons of cardboard and paper, shipping most of them in three semitrailers directly to a warehouse for Amazon. Amazon then delivered them to customers.

"It felt like technological advancement had anticipated my needs almost perfectly," said Shapiro, who sold all 25,000 copies.

Some of the new games from independent makers have even started to outsell games by major toy companies.

Three years ago, a group of eight men in their 20s - middle school friends from Highland Park, Illinois - came up with an idea for a game that resembles a profane version of Apples to Apples, the game that involves creating humorous combinations by pairing noun and adjective cards.

The result was Cards Against Humanity, billed as a "party game for horrible people." During each round, one player draws a card with a question or sentence with a missing word while the other players compete to come up with the funniest, most outrageous answer from their own selection of cards.

A typical question: "What are my parents hiding from me?"

"The placenta," reads one of the tamer answers.

Card Against Humanity and four card expansion packs for the game are the top five best-selling items in Amazon's toys and games category. While the game's creators continue to work at other jobs or attend graduate school, one member of the group, Max Temkin, 27, said none of them need to work since they all have "pretty substantial savings" from sales of the game.

Temkin said that without the help of crowdfunding, he doubted the game would have been made.

"Nobody in their right mind would think it would be a commercially viable project," he said. "It was too nerdy and weird and taboo."

Enthusiasts trace the vibrancy of tabletop games to the mid-1990s, when Settlers of Catan, a German game in which players establish colonies on a fictional island, helped kick off a renaissance in board game design. The wave of "Euro games," which tend to emphasize strategy and competition for scarce resources rather than combat, that followed added a dash of creativity to a category, populated with familiar names like Monopoly and Clue, that many people considered tired.

But in recent years, the momentum has entered a higher gear. Gen Con, a four-day tabletop game conference to be held in Indianapolis in August, took 15 years to grow to 30,000 attendees from 20,000. In the past three years, it has grown to 49,000 from 30,000, according to Adkison, who owns the rights to the convention.

Hasbro, which publishes Monopoly, Battleship and Trivial Pursuit, has seen sales in its games and puzzles category grow in recent years, including 10 percent last year from the year before.

Events like Gen Con and the growing visibility of board gaming is part of a growing celebration of geek culture that is sometimes associated with hard-core fans.

"We're definitely in this moment of the fetishization of geek," said Yancey Strickler, Kickstarter's chief executive. "And everyone is running out to talk about their geek cred."

Somewhat ironically, perhaps, video game players are often among the biggest devotees of tabletop games. Some participants in the business believe that is no accident, theorizing that the abundance of opportunities to connect electronically with people through games and social media has also created a hunger - sated by tabletop games - for face-to-face interactions.

"It turns out that being together is very addictive," said Jerry Holkins, a creator of Penny Arcade Expo, or PAX, a series of video game conferences that dedicate about a third of their exhibition space to tabletop gaming.

Still, the gaming community often finds its way back online, too. Wil Wheaton, an actor and blogger, hosts Tabletop, a popular show on YouTube and other online channels, in which celebrities and others play board games against each other.

"I want to put more gamers in the world," Wheaton said.

At his home in Mercer Island, a Seattle suburb, Shapiro recently played a spirited round of Robot Turtles with his twins, a boy and a girl. The children, who are 5, had to navigate through a maze created by Shapiro on a grid to reach gemstone cards.

With determined expressions on their faces, they selected cards to move their pieces around the board, pushing or destroying obstacles in their way. Those pieces, Shapiro said, are intended to represent the commands of a computer program.

Shapiro, who has signed a deal with a publisher, ThinkFun, to continue making the game, said he was still shocked by its success. But he said he created the game for a simple reason: so his family had a way to play together.

"This came from, 'I want to do something fun with my kids,'" he said.