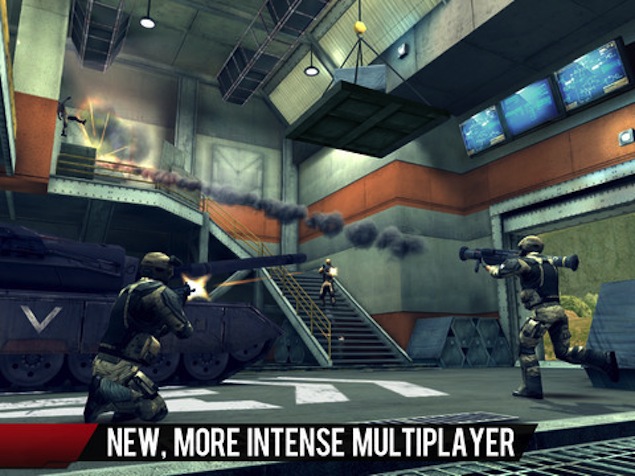 Gameloft's latest Modern Combat 4: Zero Hour has made its much-awaited debut on iPhone and iPad, while the Android version has been delayed. The game comes with enhanced graphics such as real-time shadows and other improvements including more "military support", tactical gameplay and campaign programming.

The #1 FPS is back on smartphone with a new chapter to push the boundaries of mobile gaming even further. In the wake of a nuclear disaster, the only chance to avoid global devastation is in the hands of the few elite soldiers who must track down and rescue the world's leaders from a frighteningly familiar terrorist group.

DIVE INTO THE MOST MEMORABLE ACTION THRILLER EVER
* Feel the story's dramatic intensity and see both sides of the story by also playing the villain, Edward Page.
* Dominate the battlefield with a new tactical movement system!
* Fight all over the world, from Antarctica to Barcelona!

EXPERIENCE CONSOLE-QUALITY GRAPHICS AND SOUND
* Feel the chaos of war with console-like graphics, lifelike animations and dynamic objects.
* The first Gameloft title powered by the Havok Engine for amazing ragdoll effects and the most realistic-feeling vehicles ever.
* Improved sound & voice acting performed by a renowned studio in the movie industry.

ENJOY A FULLY REDESIGNED MULTIPLAYER MODE
* Forge your own gameplay profile with an improved loadout system & over 20,000 weapon arrangements!
* A new specialization system with redesigned skills.
* Lead your character to the top of the leaderboards with a new ranking system!