One of the bigger plus points to owning an Xbox One in India is Xbox Live Gold. The subscription costs a mere Rs. 2,240 a year and gives four free games a month, in addition to allowing for online multiplayer. However it appears that Xbox Live just became a lot dearer.

Gadgets 360 has discovered that the company plans to hike its prices for an Xbox Live subscription in a big way. We received an email from the company stating that Xbox One gamers will be paying Rs. 3,999 per year — almost double of its current price.

The reason for this, seems to be due to currency fluctuations.

“After carefully evaluating the currency changes within India, and with the understanding that our offerings always provide a balance of service and value for our customers, we will be adjusting the price of our Xbox Live Gold subscriptions,” an email from the company read.

The email goes onto state that if your subscription is set to auto-renew before February 28, you will get a year’s worth of Xbox Live Gold for Rs. 2,240. Anytime after that, and its Rs. 3,999. The one month subscription will be Rs. 699 instead of the usual Rs. 350. You can check out the entire email below: 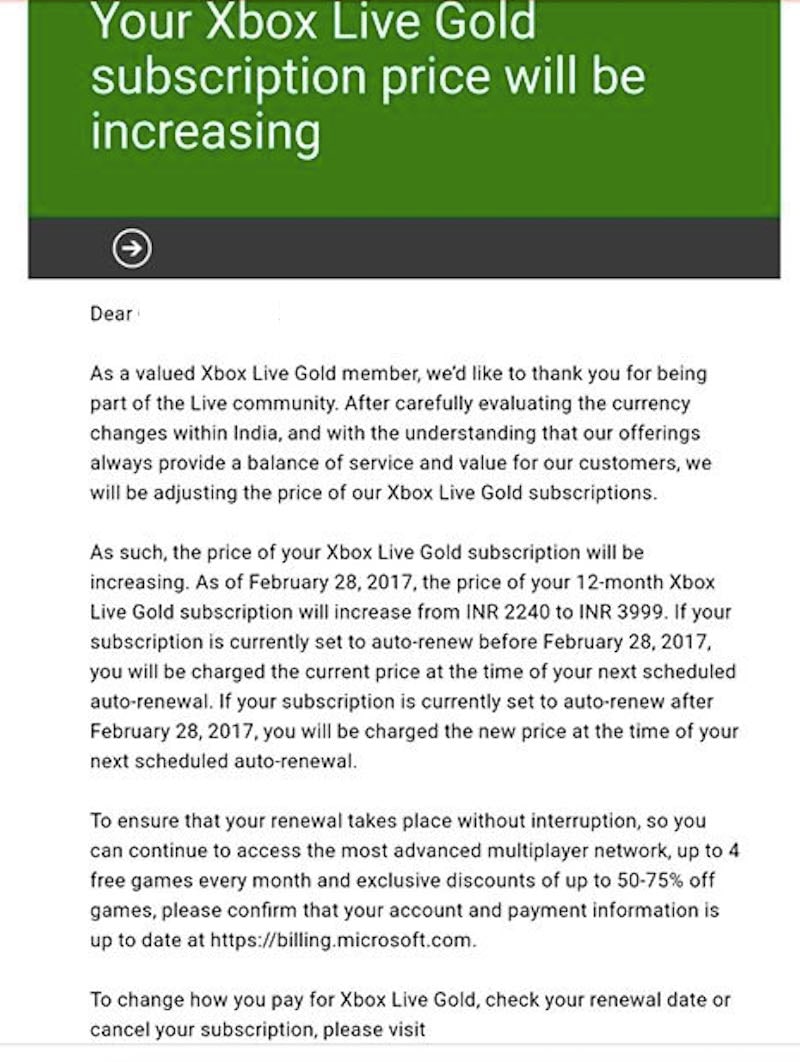 This isn’t the first time Microsoft has increased the price of its games or services in India. In the past, Gears of War: Ultimate Edition for PC saw a near 100 percent price hike.

For what its worth, Sony has had a Rs. 3,999 price for its one year PS Plus subscription while offering a month’s worth for Rs. 576. With this price hike, it makes owning an Xbox One more expensive than it should be. And with no plans to release the Xbox One S and the fate of certain Xbox One games coming on disc uncertain, it’s not a good time to be an Xbox One owner.

We’ve reached out to Microsoft India for comment and will update this the moment we hear from the company.

“We occasionally update pricing in a given market to address changing market conditions. For example, fluctuations in currency value. We do so always keeping in mind that our goal is to offer our members a premium gaming and entertainment service at a fair price," a spokesperson for Microsoft confirmed to Gadgets 360. "In this case, there are a small number of markets we will be updating Xbox Live Gold pricing in. We have notified members whose accounts are on auto-renew in those countries so they are aware well in advance.”