Logitech PowerShell Controller for iPhone and iPod launched at Rs. 8,995 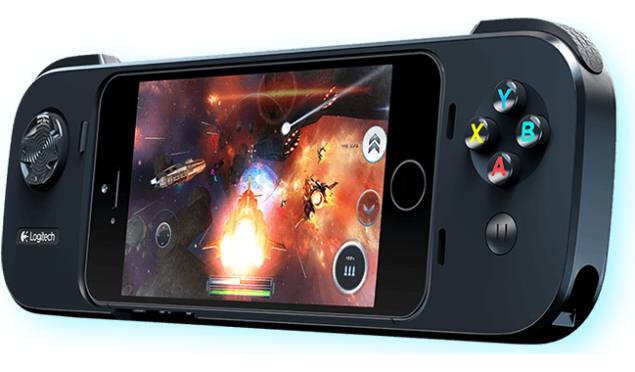 Logitech on Wednesday has announced the launch of the Logitech PowerShell Controller with battery in India, giving an immediate availability and a price of Rs. 8,995.

The Logitech mobile gaming controller works with iPhone 5s, iPhone 5 and 5th generation iPod touch, and requires iOS 7 or higher to be installed. The controller has been designed in a way that with iPhone or iPod touch in a PowerShell Controller, it still gives you the access to power on/off key, volume key, camera, speakers, headphone jack and charging port.

Logitech PowerShell Controller comes with a D-pad, shoulder triggers and face buttons for controlling the gameplay. It also features a built-in 1500mAh battery which simultaneously charges the device (iPhone 5s, iPhone 5 and 5th generation iPod) when connected. A Micro-USB charging point is given to recharge both (device and console) batteries without removing the phone from the controller.

The PowerShell Controller's back has a rubberized finish, and the entire device weighs 120 grams.

Commenting on the launch, Mr. Subrotah Biswas, Director, Logitech India and South West Asia, said, "We have designed the first kind controller for iPhone 5/5s devices for a true console-gaming experience. We understand that gaming is an extremely high speed performance activity which requires accuracy, control and precision and with mobile platform in demand, it's time to revolutionize the whole mobile gaming experience."

Logitech says that the controller can take advantage of the new capabilities afforded by iOS 7. Also the device supports the list of popular games like Bastion, Fast & Furious, Galaxy on Fire and Nitro.
Comments