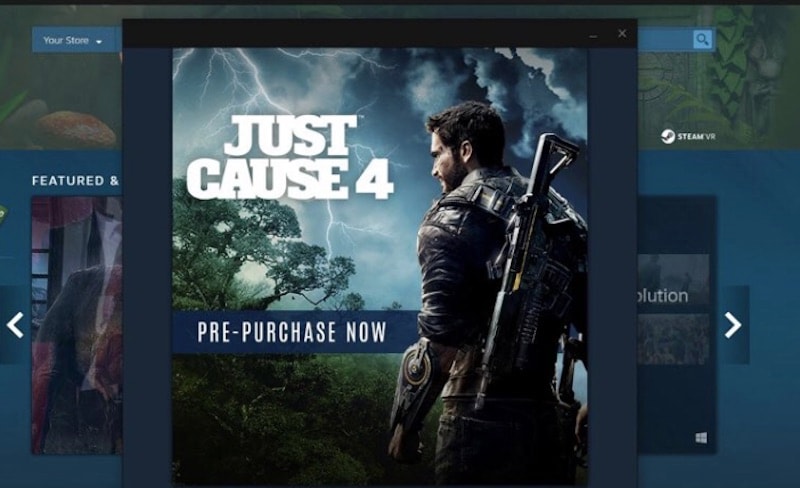 It appears that another game from last month's Walmart Canada leak is real. This time it's Just Cause 4. Thanks to a pre-order ad for the game on Steam, we now know that a sequel to 2015's open-world action game, Just Cause 3, exists. At the moment it is unknown if series developer Avalanche Studios is working on Just Cause 4 considering its hands are full with Rage 2 and its self-published shooter Generation Zero. We should see an official reveal for Just Cause 4 at E3 2018 at Square Enix's E3 2018 event.

As for a Just Cause 4 release date, it's safe to say it would skip October thanks to Red Dead Redemption 2, Call of Duty: Black Ops 4, and Battlefield V among others. Like Just Cause 3, we won't be surprised to see a December release date. Hopefully Just Cause 4 isn't as buggy as Just Cause 3.

Surprisingly, Just Cause 3 was initially planned as an online, multiplayer-only PC game with no single-player campaign. Although the success of Fallout 4 and The Witcher 3 changed publisher Square Enix's mind and decided to pursue a single-player mode for the game.

Citing people familiar with the matter, British freelance video game journalist Jim Sterling reported Square was "convinced" that the age of console gaming was coming to an end along with other video game publishers. Before the launch of PS4 and Xbox One, they reportedly thought both of them would be a flop.

"Free-to-play games, mobile games, and the PC were considered the future. Nobody wanted to invest in new intellectual property, and Square Enix especially wanted to make its old IP online-only experiences, expecting micro-transactions and piecemeal episodic content to be the only way to go," Sterling added.