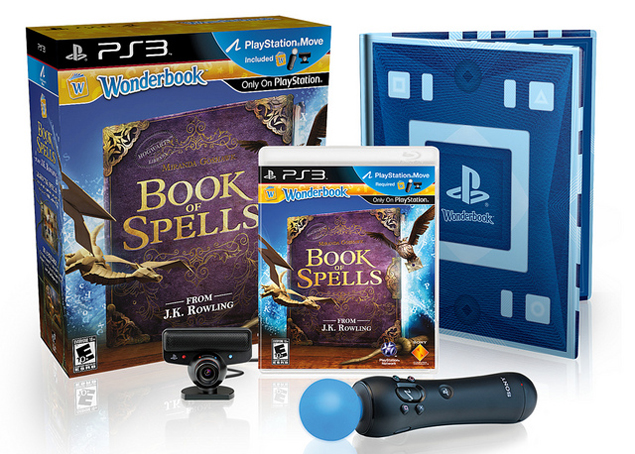 At E3 this year, Sony announced a new experience for PS3 owners called Wonderbook that makes use of augmented reality technology and the PlayStation Eye camera. The latest update is that the first title in the Wonderbook series called Book of Spells is releasing on November 13 in the US for the PlayStation3.

Posting about the development of this new project on the Sony PlayStation blog, Jenny Barbour Associate Producer said, "We recently sat down with the team to create a series of "making of" diaries that give you a closer look at the development of Wonderbook. To kick off these developer diaries, the team focused on the core technology that helped form the foundation of the project."

In this regard, Sony published a 3min 30sec YouTube video tilted "The Making of Wonderbook: Book of Spells, Developer Diary 1" to give users a closer look at the development of Wonderbook.

Book of Spells is authored by J.K Rowling, the highly acclaimed writer of the Harry Potter series. It is the first product from Sony's partnership with Pottermore. The title allows you to cast spells like Incendio, Wingardium Leviosa and Expelliarmus using the PlayStation Move controller that acts as a magic wand.

To help users get started with their Wizarding skills, Sony is also offering PS3 fans the Wonderbook: Book of Spells Move Bundle that comes with the Book of Spells game, Wonderbook peripheral, PlayStation Eye camera and a PlayStation Move motion controller - all for just $79.99.

Wonderbook, developed by London Studio, is an experience which involves a physical book that will include educational and scientific content as well from diverse authors. Additional Wonderbook titles in the making include Diggs: Nightcrawler by Moon Bot Studios, BBC's Walking with Dinosaurs and experiences from Disney.

Here's a look at one of the many Developer Diaries to come from Sony in the Wonderbook series.