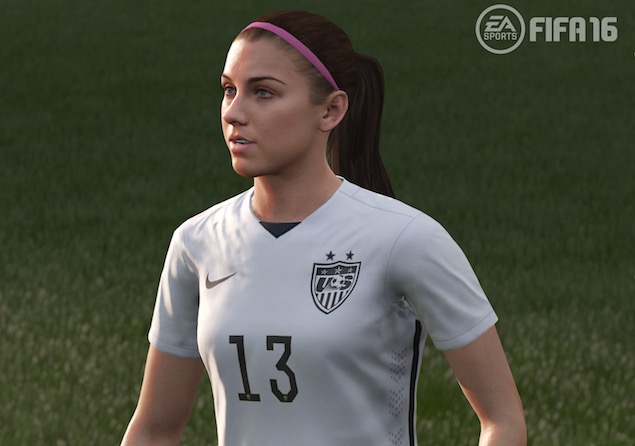 Assassin's Creed Syndicate won't be the only game this year to sport playable female characters. FIFA 16, the latest in the long line of football games, will finally have women's teams, 22 years after the video game franchise began in 1993. To put that in some more perspective, the first FIFA Women's World Cup was held in 1991, though there were several unofficial tournaments hosted in the 1970s and 1980s.

The women's national squads of Australia, Brazil, Canada, China, England, France, Germany, Italy, Mexico, Spain, Sweden, and the United States of America, will feature in this year's game. The women's teams will represent their respective federations in several FIFA 16 game modes including Kick Off, an offline tournament, as well as Online Friendly Matches.

"Bringing some of the best women's players and teams in the world to our franchise is a massive event for EA Sports, and we are equally excited about bringing millions of fans a new way to play," said David Rutter, VP and GM, EA Sports FIFA in a prepared statement. "We're making sure fans get an authentic experience when playing with Women's National Teams thanks to our innovative player capture and reference tools, as well as the sophisticated gameplay platform which we will continue to innovate on in FIFA 16."

"I honestly can't believe all of the science and technology behind the game itself, let alone getting us into the motion capture suits and eventually into the game," said Abby Wambach, world record holder for international goals scored and Forward for the United States Women's National Team. "We're all excited to see ourselves in the game, but even more excited to see the reaction from all of the fans, including the fans of our team that maybe wouldn't be expecting something like this from EA Sports."

FIFA 16 should hit India the same day it's out in Europe, September 26. While no official pricing has been announced, you can expect the PlayStation 3 and Xbox 360 versions of the game for Rs. 3,499 while the PlayStation 4 and Xbox One versions would be Rs. 3,999. The PC version would be Rs. 3,499 albeit available only digitally via EA's Origin webstore, a decision EA took last year.