Stadia is Google's streaming service that the company announced at GDC 2019. While the price, exact release date, and launch games are a mystery at this stage (aside from possibly Doom Eternal and Assassin's Creed Odyssey). However, Google Stadia boss Phil Harrison has commented on what we can expect in terms of frame rate and resolution and what Internet speed you'd need for the service in conversation with Ans Technica. According to Harrison, while Google Stadia had higher requirements when it was beta tested as Project Stream, improvements have been made to allow for 4K resolution at 60fps with a 30Mbps connection.

"[I]n actual fact, we only use an average of 20Mbps; it obviously bounces up and down depending on the scene," Harrison said of the Project Stream beta that had a 25Mbps requirement. Since then, infrastructure and codec improvements let Google Stadia go "up to 4K resolution [at 60 frames per second] within about 30Mbps."

Even then, Harrison admits that Stadia won't be available for all, even in the regions it launches in later this year. Though he believes 5G Internet may help.

"I know [Stadia] won't reach everybody [and] I respect that some people will be frustrated by that," he said. "But I suspect that some of those people don't get a great YouTube experience, they might get a good Netflix experience today. The good news is the Internet continues to grow in quality and reach. So there is a bit of a rising tide that lifts all boats, with 5G potentially helping that equation in the future. That's a little bit over the horizon today, but it's I think going to come into view pretty quickly." 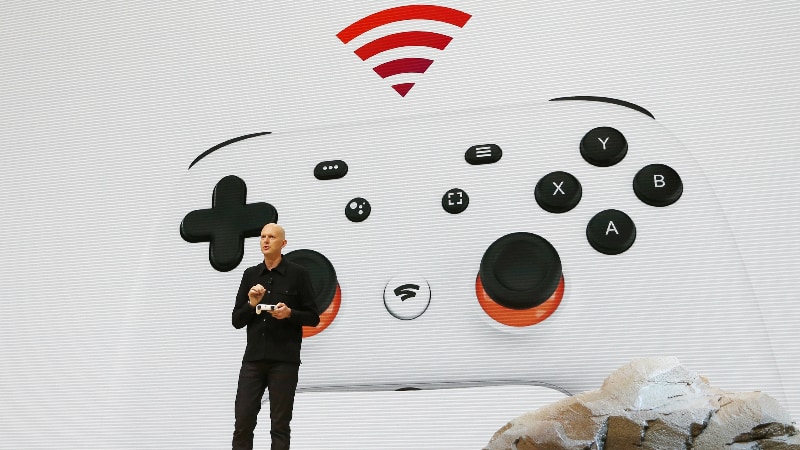 Google Stadia will be available later this year

This is higher than the 1080p 60fps requirement for Stadia, which Harrison revealed in conversation with Kotaku, stating that users needed 25Mbps for it. It's interesting that doubling the resolution to 4K and keeping the same 60fps only needs a mere 5Mbps more.

Previously, Google revealed what hardware its Stadia data centres would be running. In a detailed breakdown with video game tech analysis site Digital Foundry, the company has revealed that Stadia will be using 16GB RAM upto 484GB/s of performance, a custom AMD GPU with high bandwidth memory (HBM2) and 56 compute units.

While Google declined to give details on what exact architecture it's using, it's interesting to see the company use AMD hardware for Stadia given its penchant for Nvidia in the past. While it's noted to be more powerful than base and enhanced consoles at the moment, it will be interesting to see how it performs with Internet bandwidth being a limiting factor. Google Stadia will be available later this year in US, Canada, UK, and Europe.

Google tells Digital Foundry that the Stadia hardware "can be stacked, that CPU and GPU compute is 'elastic', so multiple instances of this hardware can be used to create more ambitious games."

It's unknown at the moment if 16GB is for the entire system or for GPU VRAM alone and Googlestates that this configuration is a first-generation system. This implies that it would evolve overtime with no user-side upgrades needed. Interestingly, the bandwidth confirmed is a 100 per cent match for the HBM2 used on AMD's RX Vega 56 graphics card.

For what it's worth, Digital Foundry's first impressions of Stadia are mixed with image quality not being upto par on bigger displays and legibility issues regarding HUD and text being an issue with smaller smartphone screens, stating that the best experience was had on a 13-inch MacBook Pro.