FIFA 14 for iOS and Android to be free to play, demo for Xbox, PS3 and PC available September 10 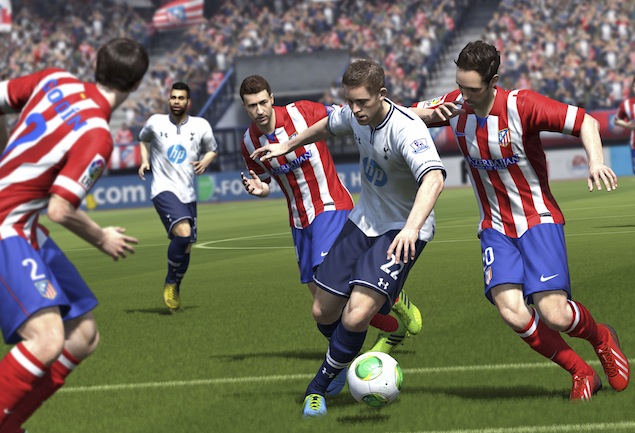 EA has announced that a FIFA 14 demo will launch worldwide for the Xbox 360 and PC beginning September 10, and for the PlayStation 3 on September 10 in North America, and September 11 in Europe.

EA also reiterated the launch dates for the game, confirming that FIFA 14 will release in North America on September 24 and worldwide on September 27 on the Xbox 360, PlayStation 3, Windows PC, Wii, Nintendo 3DS, PlayStation Vita, PlayStation 2, and PSP (PlayStationPortable). The game will also be available on Xbox One and the PlayStation 4 when the next-generation consoles come out later this year.

To ease the transition between the current and next-generation consoles, EA confirmed that fans will be able to bring their FIFA 14 Ultimate Team full roster, progress, in-game items and in-game currency (coins) from Xbox One to Xbox 360 and PS3 to PS4 so they can access and compete with their squads on either console throughout the season.

FIFA 14 on will be available on iPhone, iPad, and iPod touch as well as Android devices this fall. Buoyed no doubt by the success of Plants vs. Zombies 2 and Real Racing 3, EA has decided to make the game available for free on mobile for the very first time.

FIFA 14 is available for pre-orders now at EA's Origin online store and other retailers.

EA also confirmed that for the first time teams from Argentinean Primera Division will be featured in the FIFA franchise. This follows the announcement that the Chilean Primera Division and new Brazilian teams will be included in FIFA 14. With this, FIFA 14 ill feature 33 officially licensed leagues, over 600 clubs and more than 16,000 players.