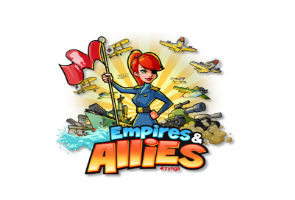 Highlights
Zynga, the creators of 'Farmville' have announced the launch of Empires & Allies. Empires & Allies will be the company's first Strategy Combat game and has been developed by their Los Angeles studio. Zynga describes Empires & Allies as their most social game to-date.

A multi-island game board, Empires & Allies will integrate familiar game play elements from popular Zynga titles. Throughout the game, players will build army units, recruit friends and encounter helpful allies and unique villains as they fight their way across enemy-held territories on the quest to defeat the final villain.

Empires and Allies will be available on June 1, 2011 in English, French, Italian, German, Spanish, Portuguese, Indonesian, Turkish and Traditional Chinese as well as Malay, Korean and Norwegian.

Previously Zynga developed the blockbuster Facebook game 'Farmville', which involved people controlling their own virtual farm and deciding what crops to grow.
Comments