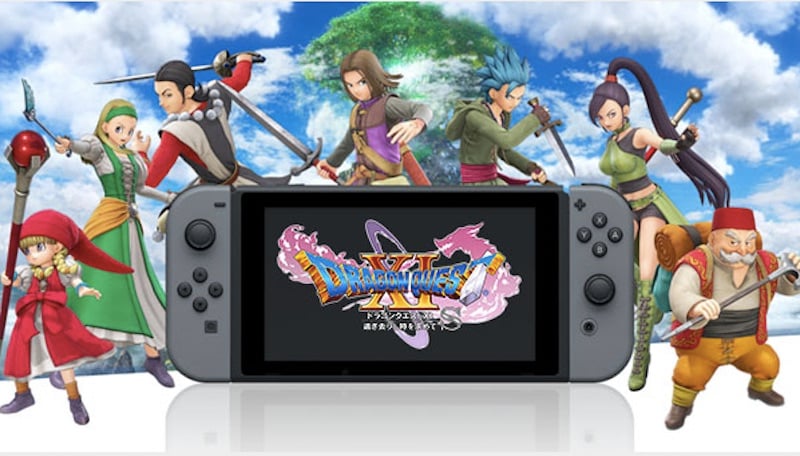 Square Enix has confirmed that Dragon Quest XI S for Nintendo Switch has a 2019 release date for Japan. Previously on Nintendo 3DS, PC, and PS4, the Dragon Quest XI S release window was announced during a stage event at Jump Festa, an annual anime and manga expo in Japan. Square Enix also showed off the game's first Nintendo Switch trailer. Dragon Quest XI S will include additional content and full Japanese voice acting including optional Japanese voice overs that weren't included in the original PS4 release. Over 200 characters are voiced. This excludes the main character.

"In the game's story you can marry [redacted due to spoilers], but I thought that people would want to choose from various characters, so we've added that," Horii said (via Gematsu). "While it isn't marriage, you can even choose Erik or Hendrik—so you can choose the person you live with."

Producer Hokuto Okamoto added this stating that "you can choose the partner you live with."

Considering that Dragon Quest XI sold four million units on PS4, Nintendo 3DS, and Windows PC, publisher Square Enix is probably looking at ways to get Dragon Quest XI in the hands of more people. A bigger concern now more than ever considering that The Shadow of the Tomb Raider sales have been tepid and the critical response to Just Cause 4 has been lukewarm at best. The Japanese role-playing title has been out since July last year in its home country, and hit Western shores on September 4.

Though Dragon Quest XI released in Japan on both Nintendo 3DS and PS4, there won't be an English-language version for the former. Dragon Quest XI will come to Nintendo Switch instead internationally.

Meanwhile, this is the first time a Dragon Quest game is on PC, and Square Enix has gone all out for it, adding features that are present in the PS4 version of the game including 4K support, a first-person camera mode, and an additional 'hard mode'.

Furthermore, Super Smash Bros. Ultimate for the Nintendo Switch may get Dragon Quest XI's hero as a playable fighter. According to reports, Nintendo's fighting game could see the addition of Erdrick as a playable fighter, Dragon Quest's Slim mascot appearing on screen, and the level being Alefgard. First reported by Persona Central, the site also claims that this collaboration is taking place to "the benefit of overseas marketing for the DQ [Dragon Quest] series". In addition to this, Super Smash Bros. Ultimate getting Dragon Quest XI's hero has been "achieved through active collaboration on Square [Enix]'s side".