Call of Duty: Black Ops Cold War, Warzone to Get Season Four Reloaded on July 15 — All the Details 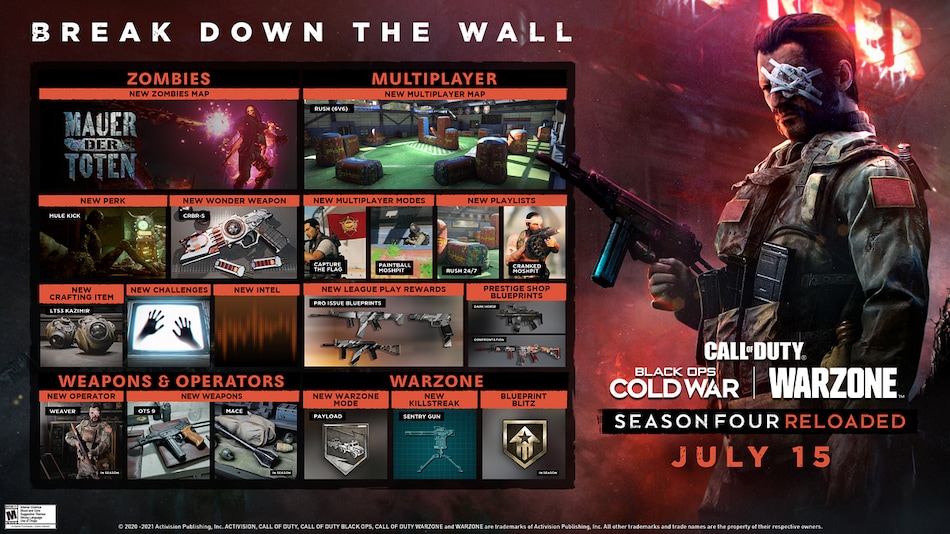 Call of Duty: Warzone will get a new objective-based Payload mode

Call of Duty: Black Ops Cold War and Warzone will get the Season Four Reloaded update on July 15 which will add more content to what the Season Four update from June 17 introduced. The update will bring Mauer Der Toten — the new zombies experience for Black Ops Cold War, a new map, modes, weapons, and more. Call of Duty: Warzone will get an objective based game mode called Payload, a new event, killstreak, gifting mechanics, and more.

Call of Duty: Black Ops Cold War will unveil the next chapter in its Dark Aether story called Mauer Der Toten that is a round-based zombies map. In this mode, players will have to navigate the dark streets to reach various key landmarks while fighting off zombies. The Mule Kick from the original Call of Duty: Black Ops will return with Mauer Der Toten and give players the ability to carry three weapons. It also brings the LT53 Kazimir grenade which opens a black hole that sucks in the nearby zombies. A Wonder Weapon named CRBR-S is an upgradable energy-based pistol that can be transformed into a completely different weapon after using Mod kits. The new map brings new challenges as well.

Players on PlayStation consoles will get a new Onslaught map where they fight zombies and collect intel. It brings a new LMG weapon blueprint — Chemtaminate.

Both Call of Duty: Warzone and Black Ops Cold War will get two new weapons — OTs 9 SMG and Mace melee weapon. A new NATO operator named Weaver will join the roster as art of the Tracer Pack: Weaver Operator Bundle.

Call of Duty: Warzone will exclusively get the Payload game mode that is the first-ever objective mode in the battle royale game. It will have two teams of 20 players face each other to escort vehicles across several checkpoints to gather crucial intel. The opposing team can buy and build obstacles to slow them down or kill the players. A new event called Blueprint Blitz will be introduced wherein players will have a chance to unlock permanent weapon blueprints by completing contraband contracts. The Season Four Reloaded update will add more content to the Red Doors that were recently introduced. The developers have not shared details on this, and players will have to discover more on their own.

The Sentry Gun killstreak is an automated turret with a 180-degree radius that lasts for one minute. It can be found in the Legendary item drop in a Red Door room Supply Box. Additionally, players will be able to gift Battle Pass and Store Bundles to others. These are the major features coming to Call of Duty: Warzone and Black Ops Cold War on July 15.

EU Pauses Digital Tax Plan After US Push, but Ireland Sticks to Its Guns