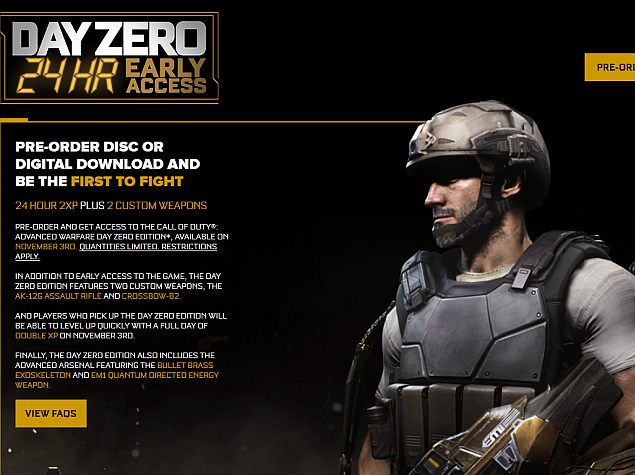 Activision has announced the latest Call of Duty, Advanced Warfare, can be played one day ahead of its official release on November 4. The early access to the full-release is for those customers that pre-order the game, as they will receive the Day Zero Edition.

The publisher added that there are three Collector's Editions (Atlas Pro, Altas Limited, and Digital Pro) of Call of Duty: Advanced Warfare, all of which also get access to the Day Zero Edition's early access on November 3, as well as its specific content.

The Call of Duty Advanced Warfare Day Zero Edition will be available for PC, Sony PlayStation 4, PS3, Microsoft Xbox One, and Xbox 360.

The Day Zero Edition announcement by Activision came alongside its first look at the game's new multiplayer tweaks at Gamescom. The new tweaks include new maps, weapons along with the new Pick 13 format, which in previous games was the Pick 10. The new Pick 13 create-a-class system comes with more customisable options.